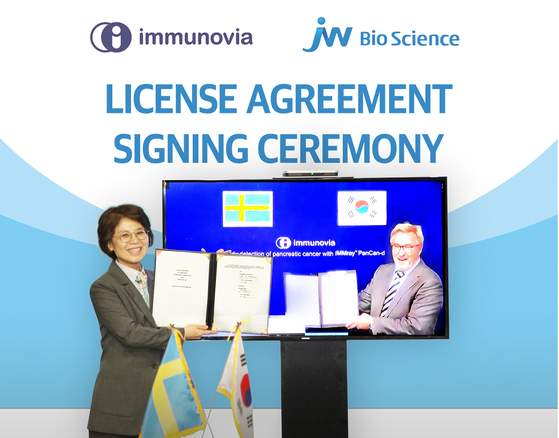 Under the deal, Immunovia gets global commercial rights for the two biomarkers, though specific details about the contract and monetary terms have not been disclosed.

The licensing deal with Immunovia will help JW Bioscience “increase its presence in the global in vitro diagnostics market,” the company said.

JW Bioscience is developing a test kit that can detect pancreatic cancers using the two biomarkers. If commercialized, the test kit could be used in early diagnosis of the disease with a minimum amount of blood samples.

Pancreatic cancers cause about 1,000 deaths per a day. The five-year relative survival rates for pancreatic cancer — which refers to the percentage of all patients who are alive five years after diagnosis — is only 12 percent, the lowest among all types of cancers, according to JW Bioscience.

“The deal is meaningful in that JW’s patents have been recognized in the global market, as well as the technologies we own,” said Hahm Eun-kyung, CEO of JW Bioscience. “With the cooperation with Immunovia, we will be able to strengthen our technological competitiveness about the two biomarkers CFB and CA19-9.”