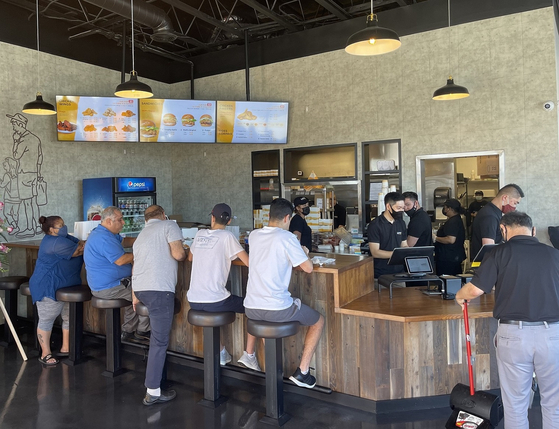 
Mom’s Touch plans to open 100 stores in the United States by 2025 and branch out to Southeast Asia, the chicken sandwich franchise said Tuesday.

Mom’s Touch ran a few temporary "test stores" in the United States in 2017, before opening its first official store in June through a partnership with local firm The Inqusys Group, which runs WaBa Grill franchise restaurants.

Located in downtown Los Angeles, the store that opened in June covers 1,500 square feet with 25 seats.

Mom’s Touch said its spicy seasoning has proven popular in the United States.

The menu at the U.S. store includes a range of Mom's Touch sandwiches and chicken, from the creamy garlic-flavored sandwich to soy garlic fried chicken.

A second Mom’s Touch with a drive-thru will open in Long Beach, California within this year.

“Having successfully taken the first step in the United States, where lots of global sandwich franchises exists, is meaningful for us as a Korean sandwich franchise,” said a spokesperson for Mom’s Touch in a statement.

Mom’s Touch said it also plans to expand in other Asian countries, including Thailand, Vietnam, Indonesia and the Philippines, where interest in Korean food is high.

There are three Mom’s Touch stores in Singapore.

In Korea, Mom’s Touch is currently facing criticism from some of its franchise operators who complain of a lack of communication with the headquarters from early this year.

The conflict was aggravated last month when Mom’s Touch canceled the contract of one franchise operator in Seoul for “spreading false information” that the profit of franchise stores is declining as the company rapidly expands the number of stores to make more money at the expense of franchisees.

Mom’s Touch said on Monday it will establish an organization aimed to solve internal conflicts within this year.