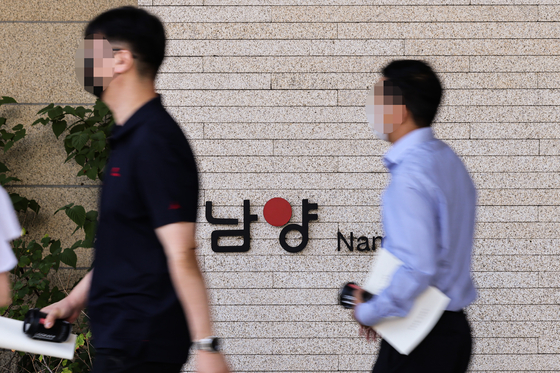 
The nominations of four directors chosen by Hahn & Company were voted down by shareholders of Namyang Dairy Products Tuesday.

Hahn & Company had agreed to buy 53 percent of the dairy company’s shares until Chairman Hong Won-sik walked away from the deal earlier this month.

Hong’s representative from L.K.B & Partners attended the extraordinary shareholders meeting held Tuesday at the company’s headquarters in Gangnam, southern Seoul. Hahn & Company did not send any representatives, according to local media outlets.

The meeting reportedly lasted around 10 minutes.

Namyang plans to hold another extraordinary shareholders’ meeting next month.

“Restructuring of the board members for management stabilization and changes in executives are some of the issues that will likely be discussed in the next meeting,” said a spokesperson for Namyang.

The result of Tuesday's meeting was expected as the deal by Hong and related parties to sell 53 percent of the dairy company’s shares to Hahn & Company was not closed by the official deadline of Aug. 31.

Hong formally scrapped the deal and informed the buyer that it was off on Sept. 1.

The deal came after Namyang’s research institute claimed in April that the company’s Bulgaris yogurt drink could help protect people from Covid-19, unleashing a storm of accusations and setting into motion an investigation.

Hong said he will look for another buyer.