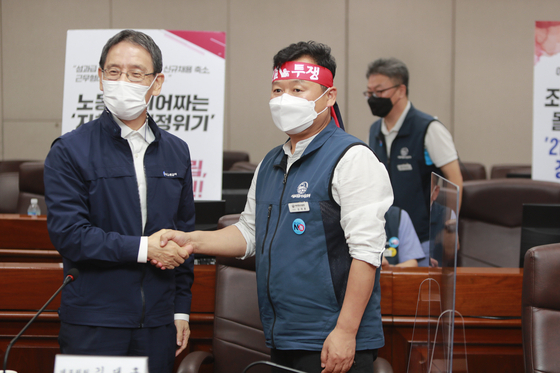 Members from Seoul Metro and the Seoul Transit Corporation Labor Union shake hands after reaching a last-minute agreement at the Seoul Metro Headquarters in Seongdong District, eastern Seoul, shortly before midnight on Monday. Accordingly, a strike by Seoul subway workers scheduled for Tuesday was called off. [NEWS1]


The labor union of Seoul's subway workers called off a strike scheduled for Tuesday morning after reaching a last-minute agreement with its operator, Seoul Metro, during the final round of negotiations late Monday.

After marathon negotiations that started at 3 p.m. Monday, the two sides reached a provisional agreement at 11:40 p.m., which scrapped Seoul Metro’s originally proposed restructuring plan to lay off employees and freeze wages.

The two sides also agreed to create a joint consultative body between the labor union and management to overcome Seoul Metro’s financial crisis.

The union and Seoul Metro also called on Seoul Metropolitan Government and the central government to provide compensation for financial losses from excessive subway fare discounts and a decline in the number of passengers due to Covid-19.

The negotiations between Seoul Metro and its labor union, Seoul Transit Corporation Labor Union, had been deadlocked for three months.

The union threatened to go on strike Tuesday morning if Seoul Metro went through with a company restructuring plan that was devised to overcome its expected losses of 1.6 trillion won ($1.36 billion) this year and debt amounting to 700 billion won.

“We put the brakes on Seoul Metro and the city government’s erroneous plan that would have forced employees to sacrifice unfairly for the company’s financial problems,” said the spokesperson for the union after the final round of negotiations ended.

Seoul Metro said it will avoid making any further unilateral decisions that put its employees at stake.

The agreement will be finalized as soon as it goes through a vote at the labor union in the next couple of weeks.


Concerned about the possibility of a strike, Justice Party representative and member of the Land Infrastructure and Transport Committee Sim Sang-jeung met with the labor union’s representative before Monday’s meeting to push for an agreement to be reached.

She also discussed the possibility of the government covering Seoul Metro’s financial losses incurred from free subway rides given to senior citizens and the underprivileged.

The union said that Seoul Mayor Oh Se-hoon and Seoul Metropolitan Government need to make moves to resolve the situation.

“The Seoul Metropolitan Government should feel heavily responsible for Seoul Metro’s financial troubles,” said the union’s spokesperson. “We urge the city government to come up with support measures as soon as possible.”

However, a union member told the JoongAng Ilbo that the government may already be discussing solutions.