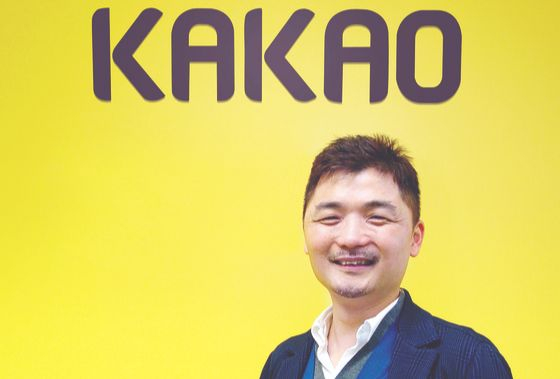 
Kakao will pull out of some businesses that compete with small, independent stores, taking seriously the government’s recent rhetoric against big internet companies.

The tech company behind instant messenger Kakao Talk will phase out a service delivering flowers, desserts and salads that have been offered through its taxi-hailing affiliate Kakao Mobility.

The service has been considered tough competition for mom-and-pop retailers.

"We received a powerful alarm from our society," said Kim in a statement Tuesday. "As such, Kakao Corp. and its key subsidiaries have resolved to boldly abandon the growth method we have pursued for the past ten years. We are aiming to make a fundamental change that will enable socially responsible growth.

"We must and will build a model for Kakao and all our partners to grow together," he said, "especially in line with our core belief of a better world created by technology and people."

In transportation-related services, Kakao Mobility will shut a taxi-hailing option called Smart Call, in which extra fees are charged to connect users with taxis more likely to accepting their ride requests.

The Kakao T app, run by Kakao Mobility, will abandon a fixed rate policy for its designated driver service and switch to a variable rate between 0 percent and 20 percent depending on supply and demand. This is more affordable: currently, it charges a 20 percent blanket rate.

In a gesture of support for small merchants, Kakao vowed to create a fund worth 300 billion won ($256 million) over five years that will be used to support its partners and self-employed people, including taxi drivers.

The promises came after the group came under scrutiny for its aggressive expansion built on its original service, the wildly popular Kakao Talk messenger.

Kakao had 115 local affiliates as of June, with that number rising to 158 if overseas subsidiaries are included.

Local media has reported that the agency launched a probe into that allegation, although the FTC declined to confirm.
In Tuesday's announcement, Kakao noted that its holdings unit will “focus on creating social values in the area of future education and talent development.”

Still, Kakao and other IT giants like Naver face more scrutiny from lawmakers and the bureaucracy, who are questioning the clout they have built up through their apps and services.

The FTC plans to amend the Fair Online Platform Intermediary Transactions Act to oblige big online retailers to sign a contract with sellers when deciding to carry products on their e-commerce websites. Currently, the two parties aren’t obliged to draw up contracts.

If the amendment is made, the contract will have to include the size of commissions the platform operators will receive.