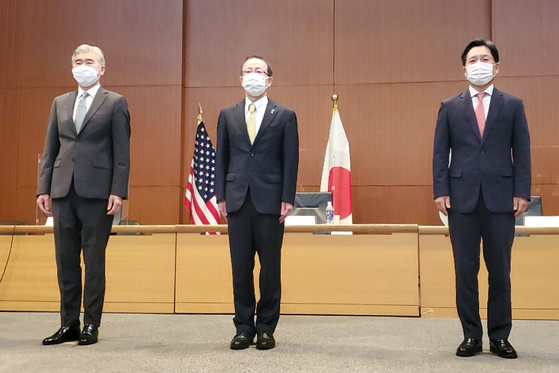 
Chinese Foreign Minister Wang Yi kicked off a two-day visit to Seoul Tuesday following North Korea's tests of long-range cruise missiles over the weekend, an issue also being addressed by nuclear envoys from South Korea, the United States and Japan meeting in Tokyo.

South Korean Foreign Minister Chung Eui-yong and Wang, also a Chinese state councilor, will hold talks Wednesday morning and are expected to discuss ways to bring Pyongyang back to dialogue after a collapse of denuclearization talks with the United States.

The three countries showed subtle differences in their priorities, with Seoul focusing on the "Korean Peninsula peace process," Washington on "diplomatic engagement" and Tokyo on the North Korean "missile threat."

During the meeting, the U.S. nuclear envoy said he still hopes North Korea "will respond positively" to multiple offers by the United States to "meet without preconditions."

"To explore the potential for the diplomacy, the U.S. continues to reach out to Pyongyang to restart dialogue," said Kim at the start of the trilateral talks. "We harbor no hostile intent towards DPRK, and we're open to meeting with them without preconditions."

He referred to the acronym for the North's official name, the Democratic People's Republic of Korea.

Kim also emphasized American commitment to the security of South Korea and Japan, adding, "The recent developments in DPRK are a reminder of the importance of close communication and cooperation between the allies."

The International Atomic Energy Agency reported recently that North Korea appears to have resumed operation of a 5-megawatt reactor at its key Yongbyon nuclear complex in July, after no signs of activity since December 2018, another possible setback in engagement efforts.

Seoul's Ministry of Foreign Affairs said in a statement that the three countries shared the need for stable management "taking into consideration the recent situation on the Korean Peninsula." They also discussed "cooperative measures for the early resumption of the peace process on the Korean Peninsula," stressing that "dialogue and diplomacy are urgent to achieve denuclearization."

The ministry added that South Korea and the United States in particular "held in-depth discussions on various ways to engage North Korea, including joint humanitarian cooperation projects and trust-building measures."

After the talks, Kim told reporters in Tokyo, "We are prepared to work cooperatively with the DPRK to address areas of humanitarian concerns regardless of progress on denuclearization."

Kim said, "The United States supports the provision of humanitarian aid, consistent with international standards for access and monitoring to the most vulnerable North Koreans."

He added that the United States is ready to support "certain" inter-Korean humanitarian cooperation projects. 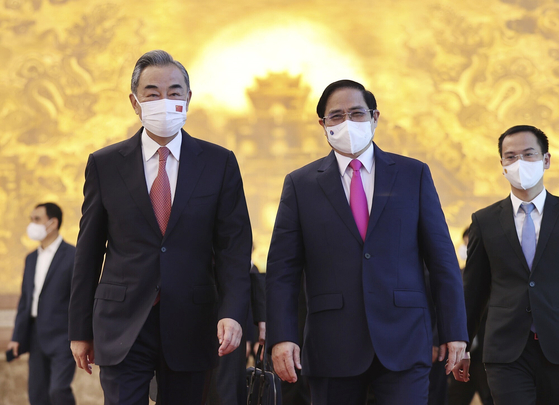 Wang's visit comes amid intensifying Sino-U.S. rivalry, leaving open the possibility that Beijing could press Seoul to maintain neutrality on issues related to its power struggle with the United States, which may put the South in a diplomatic dilemma.

On a trip to Vietnam, Wang stressed Saturday that the two countries should avoid actions that magnify disputes in the South China Sea.

There is interest in what message Wang might have on the North Korea issue during his Seoul visit, including its response to the latest missiles tests. President Moon Jae-in was also set to meet with the Chinese foreign minister Wednesday.

South Korea was the last leg of a six-day tour which also took Wang to Singapore and Cambodia.

Next year marks the 30th anniversary of the establishment of diplomatic relations between Seoul and Beijing.