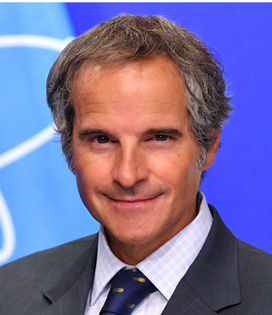 The chief of the United Nations nuclear watchdog called North Korea's continuing nuclear activities "a cause for serious concern" in his statement to the agency's board of directors on Monday.

In his report, Director-General Rafael Grossi of the International Atomic Energy Agency (IAEA) said that the body observed signs of activity at the Yongbyon nuclear complex from mid-February to early July.

Pyongyang expelled all IAEA monitors and inspectors from the country in 2009, but the agency continues to monitor activities in the North through satellite imagery to make assessments on the country's nuclear program.

The agency most recently released a report in late August saying that the main 5-megawatt nuclear reactor has been discharging cooling water since July, which was likely used to remove heat from the nuclear reactor core.

A radiochemical laboratory at the same complex had also been operating for five months from February to July, suggesting that it had re-processed a full batch of spent fuel in that time frame.

Re-processing allows the recovery of any remaining product in spent nuclear fuel that could undergo fission again in a new fuel assembly. Fission is the splitting of heavy nuclei, such as uranium, which releases energy.

In its August report, the IAEA described the activities at the reactor and laboratory as "deeply troubling" and in violation of United Nations Security Council resolutions.

Centrifuge enrichment is a physical process to concentrate one isotope in uranium — U-235, the main fissile type of uranium — relative to others. This isotype is used in the fission process to produce energy in nuclear power plants and nuclear weapons.

In addition to Yongbyon, the IAEA observed signs of continued internal construction activities at the light water reactor under construction at the Kangson nuclear complex just outside Pyongyang, where the North is suspected of conducting uranium enrichment.

"The new indications of the operation of the [5-megawatt] reactor and the Radiochemical Laboratory are deeply troubling," Grossi said.

“I call upon the [the North] to comply fully with its obligations under relevant UN Security Council resolutions, to cooperate promptly with the Agency in the full and effective implementation of its [Non-Proliferation Treaty] Safeguards Agreement and to resolve all outstanding issues, especially those that have arisen during the absence of Agency inspectors from the country.”