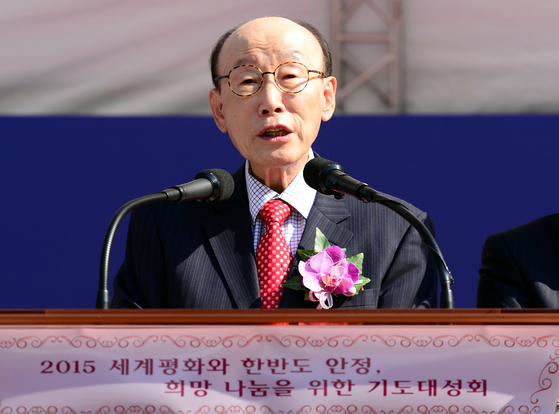 
Rev. Cho Yong-gi, the founder of the world's largest Christian congregation Yoido Full Gospel Church based in Seoul, died Tuesday at the age of 85.

Cho had been receiving treatment at Seoul National University Hospital in central Seoul for cerebral hemorrhage since July 2020, after he hit his head against the door in his church office.

The pastor emeritus was born as the eldest of five sons and four daughters in a Buddhist family in Ulju County, Ulsan, in February, 1936.

At the beginning of the 1950-53 Korean War, his family fled to Busan but fell into severe poverty. During his high school years, Cho was diagnosed with fatal tuberculosis and had to be isolated from his family. When it was declared that he had less than three years left to live, he was visited by a friend of one of his sisters who gave Cho a Bible — his first exposure to Christianity and God.

Cho, who was not yet familiar with Christianity, happened to meet Kenneth Tice, an American missionary from the Assemblies of God, an American Pentecostal denomination. It is said that Cho's faith grew deeper after meeting Tice and going to the missionary's revival prayer meeting. Tice was impressed by Cho's English, and Cho began to help Tice by interpreting his sermons from English to Korean.

One day during his fasting prayer, it is said that Cho had a vision of Jesus in white clothes, which prompted him to dedicate his life to preaching the gospel.

Cho moved to the capital and enrolled in the Full Gospel Theological Seminary of the Assemblies to God denomination in Seodaemun District, western Seoul. This experience later had a profound impact on his life, as he met Choi Ja-shil, his classmate and future mother-in-law who helped him speak in tongues, which is seen as a sign of baptism in Pentecostalism.

After graduating from seminary, in 1958, Cho started a home worship with Choi at her house, located in a slum village in northern Seoul. He preached on a podium made of a box of apples covered with cloth. Except for his family, the only person who attended his first service was an old lady who came to avoid the rain while working in the field.

As time went on, more people came. When the worshippers grew to 50, he opened a tent church. Cho held congratulatory speeches and faith healings — also part of the Pentecostal tradition. Sick people who had financial difficulties from going to the hospital and socially excluded outsiders flocked to the tent church.

Under his leadership, the church achieved explosive growth and moved from one location to another, finally opening the current Yoido Full Gospel Church with 8,000 worshippers in Yeouido, western Seoul, in 1973.

In 1993, the church had more than 700,000 members, becoming the world’s biggest church congregation according to the Guinness Book of World Records.

The pastor established the Kookmin Ilbo, one of Korea’s major newspapers, in 1988 and set up Good People, an international nongovernment development organization advocating for human rights, environment protection and child welfare activities. Cho also pushed for establishing a cardiac hospital in Pyongyang, North Korea, though it remains unfinished due to sanctions.

Cho stepped down as senior pastor of Yoido Full Gospel Church in 2008 and appointed Pastor Lee Young-hoon as his successor.

Cho is survived by three sons. His funeral is scheduled to take place on Saturday at the grand hall of Yoido Full Gospel Church, after receiving mourners from Wednesday.