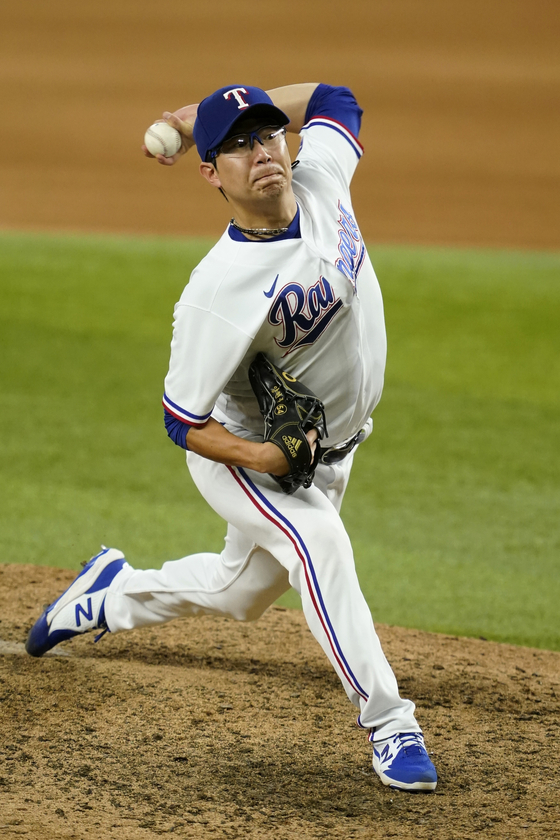 Texas Rangers relief pitcher Yang Hyeon-jong throws in the seventh inning of a baseball game against the Houston Astros in Arlington, Texas on Monday. [AP/YONHAP]


Yang Hyeon-jong gave up two home runs in two and one third innings pitched against the Houston Astros on Monday, appearing out of the bullpen for the Texas Rangers in the tough 15-1 loss.

The Rangers were already 11-1 down when Yang was brought on in the sixth inning with two in, two out and the bases loaded. Yang gave up a single on his second pitch, allowing two unearned runs to cross the plate, before getting a groundout to get out of the inning.

Yang looked stronger in the seventh, striking out the first two pitchers before allowing Yordan Alvarez to hammer a homer and take the score to 14-1. A single followed, but Yang was able to force a lineout and end the inning.

The eighth followed almost exactly the same formula, with two outs — this time a groundout and a strikeout — followed by a home run from Jose Siri. Another groundout rounded off the inning and ended Yang's games — the Korean southpaw was pulled at the top of the ninth for Charlie Culberson.

Yang's two earned runs in two and one third innings isn't going to do much for his personal stats, but within the context of Monday's game it actually makes him one of the better Rangers pitchers. Starter Spencer Howard allowed with six earned runs in one and one third inning, Wes Benjamin gave up a run in two thirds of an inning and A.J. Alexy gave up six in three and two third innings. Statistically, the only person who did better than Yang was closer Culberson, with one hit and no runs in an inning.

Yang was called up to the majors on Sept. 1 after one day in the minors following a brief one-game tour of duty at the end of August. Yang has given up four runs in 4 and one third innings pitched since being called up for a 8.31 ERA on the month. His season ERA is now 5.60.