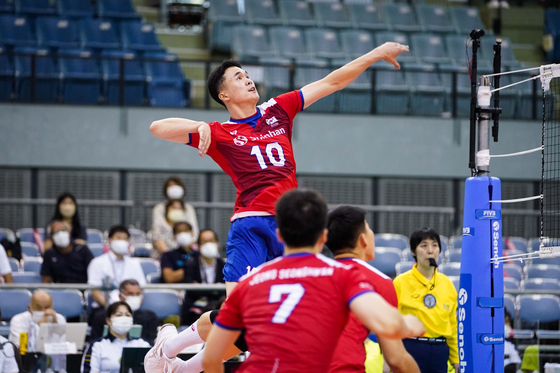 Jueng Tae-hyun jumps for the ball in a game against Saudi Arabia at Chiba Port Arena in Chiba, Japan on Sunday. [ASIAN VOLLEYBALL CONFEDERATION]


Korea dropped their final preliminary round match of the 21st Asian Senior Volleyball Championship against Taiwan at Funabashi Arena, Chiba, Japan on Tuesday.

Taiwan proved to be a much more difficult opponent.

The first set was neck-and-neck until Korea edged out Taiwan 25-23. Taiwan started out the second set with a three-point lead that widened toward the end, taking the set 25-21. Korea opened the scoring in the third set, but Taiwan made a come back for an 11-11 tie then quickly took the lead to finish the set 25-21. Taiwan also took the fourth set 25-21, winning the match with three sets to Korea's one.

Taiwan tops pool D with three wins and no losses. Despite dropping the last match, with two wins, Korea earns a berth in the classification round as the second team in pool D.

Korea's success so far is an encouraging time, especially as the Korean national team is not actually competing at the tournament. Instead, the Korea Armed Forces Athletic Corps were dispatched to represent Korea on the international stage because all athletes on the Corps team are fully vaccinated. Korea qualified for the event at the 2019 Asian Men's Volleyball Championship in Tehran, Iran, taking fourth place.

The team jetted off for Japan after training for the tournament for three weeks in Mungyeong, North Gyeongsang. Before training for the Asian Championship, the team joined the seven men's V League teams in vying for the KOVO Cup, where they won their first match against the KB Insurance Stars and beat the Seoul Woori Card Wibees. The Corps dropped out of their third match, losing to the Incheon Korean Air Jumbos.

Korea advances to the classification round alongside Japan, Qatar, Iran, Pakistan, China, Australia and Taiwan. Matches begin on Thursday.