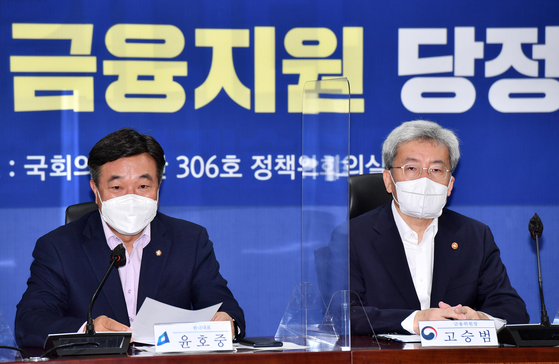 Democratic Party floor leader Yun Ho-jung, left, and FSC Chairman Koh Seung-beom speak during a meeting at the National Assembly on Wednesday. The DP and the government agreed to extend the debt suspension program for another six month. [YONHAP]


The government and ruling Democratic Party on Wednesday decided to extend the suspension of debt repayments for another six months to ease the burden on small shop owners.

Debt repayments for small store owners and SMEs will be suspended until March next year. The debt suspension program was to expire by the end of this month.

It is the third time that the government has decided to extend the debt suspension since it was first implemented in April last year to ease the burden on small businesses affected by the spread of Covid-19.

The first extension of the program was in September last year. Another six-month extension was made in March.

“As of July, [the government] has provided financial aid amounting to 222 trillion won ($190 billion) [through the debt suspension program],” said Yun Ho-jung, the Democratic Party's floor leader. “And the debt maturity payment has been suspended twice.

“However, as the Covid-19 situation is not improving, our party has asked that the government to actively consider another suspension.”

According to the Financial Services Commission (FSC), 94 percent of that debt, or 210 trillion won, would have matured if the suspension had not been extended.

The rest, or 12.2 trillion won, were supposed to be repaid to their respected financial institutions but have been on hold since April last year.

FSC Chairman Koh Seung-beom, who entered the post earlier this month, however, raised concerns over extending the debt suspension program.

“[The suspension program] has played a huge role in giving time to counter the impact caused by Covid-19 for small business owners and SMEs,” Koh said. “But, the current measures as they has been prolonged could increase the burden on lenders and their loan returns. There’s also concerns that it could lead to the potential insolvency of financial institutions.”

He said that considering the growing burden of repaying loans that have been suspended, there is also the need to take gradual steps toward normalizing the currently implemented measure.

There have been growing concerns in the financial market over debt insolvency as the Bank of Korea (BOK) has been normalizing its monetary policy.

The Korean central bank increased the key rate for the first time in 15 months in August despite government warnings and fear of inflation.

The interest rate was raised from a historic low of 0.5 percent to 0.75 percent, adding a burden on interest returns.

However, this may not be the end, as BOK Gov. Lee Ju-yeol has been hinting at another hike within this year.

The FSC chairman said he will work with the financial industry and utilize government resources to lower the burden on lenders.

“Through banks’ pre-workout system and the Credit Counseling & Recovery Service, we will strengthen our support for those that need help as well as reducing interest payments,” Koh said.

He added that through government backed financial programs, the government will supply liquidity of roughly 4 trillion won and monitor closely against insolvency.

The self-employed and small shop owners advocate groups, however, argue that extending debt repayments is not enough.

They argue that suspending payments is only a temporary solution that doesn’t solve the essential issue and demand that the government take more aggressive measures, especially easing or entirely lifting social distancing regulations.

The ruling DP was also accused of pushing for an emergency grant for the majority of Koreans instead of focusing more on small shop owners that are most affected by social distancing regulations.