Stocks up for fourth session in a row

Stocks up for fourth session in a row 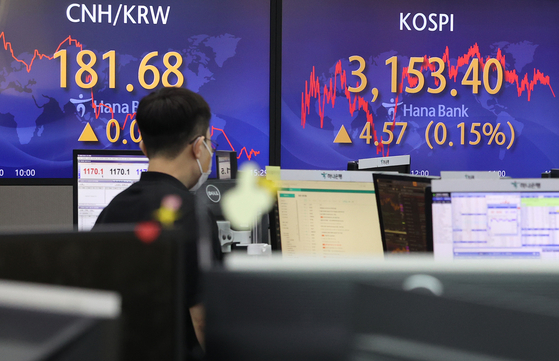 A screen in Hana Bank's trading room in central Seoul shows the Kospi closing at 3,153.40 points on Wednesday, up 4.57 points, or 0.15 percent, from the previous trading day. [YONHAP]


Stocks advanced for a fourth session Wednesday, supported by foreign buying as some investors sought to digest weak inflation data in the United States. The won rose against the dollar.

Trading volume was moderate at about 605 million shares worth some 12 trillion won ($10.2 billion), with gainers outnumbering losers 531 to 322.

The Kospi opened higher as bargain hunters sought oversold stocks on expectations of future price hikes. But trading turned choppy in the late morning as investors tried to digest the weak economic gauges.

Korea's job growth slowed for the fourth straight month in August, largely due to the latest surge in Covid-19 cases and the toughest-ever virus curbs.

The Kospi rebounded in the afternoon as investors increasingly pulled optimism from the data.

The local currency closed at 1,170.5 won to the dollar, down 0.3 won from the previous session's close.