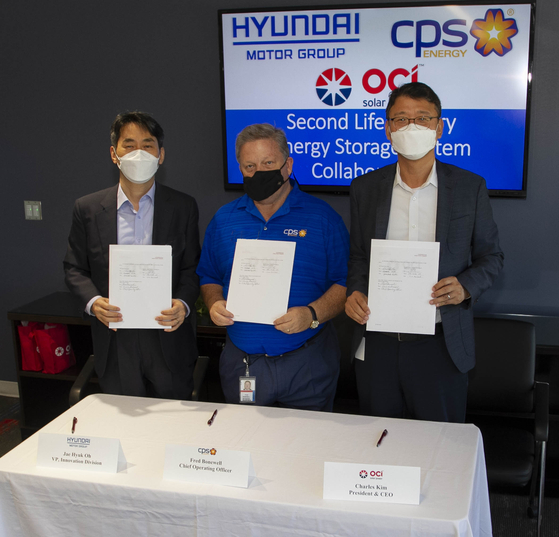 OCI Solar is a wholly owned subsidiary of Korea-based renewable energy and materials company OCI and is headquartered in San Antonio, Texas. It runs solar power and ESS projects in North America.

CPS Energy is a state-owned electricity and natural gas company that provides power to some 1.2 million households in Texas.

Under the MOU, Hyundai Motor will source used batteries from its EV models while OCI Solar will be responsible for a power conditioning system, a core equipment in processing solar energy into electricity. CPS Energy will provide the site and operate the system.

The facilities will be built by next September.

The three companies have been working together in developing environmentally friendly energy.

OCI Solar has been working  with CPS Energy since 2012 to run solar power projects in Texas.

“CPS Energy has been a visionary leader for solar projects in Texas. And now, nearly 10 years after we began developing solar and storage solutions in Texas, we are stepping up our green-energy game. This new collaboration among Hyundai Motor Group, CPS Energy, and OCI Solar Power, will make us one of the first to study the performance and cost benefits of redeploying EV batteries,” said Charles Kim, CEO & President of OCI Solar Power.