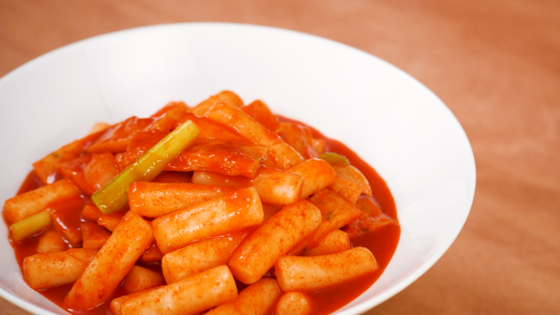 
The government’s recent decision to prohibit food giants from entering the tteokbokki rice cake market is hurting some that planned to expand rice cake production this year.

Rice cakes produced for export and those made with local flour or rice are exempted from the restriction.

Regardless, some local businesses don't like the government's decision.

Tteokbokki is a stir-fried rice cake.

The Ministry of SMEs and Startups announced earlier this month that it would block local food giants from entering the rice cake manufacturing business for the next five years through September 2026.

Major food companies that are already in the business are limited from expanding production volume by more than 10 percent.

The goal is to protect smaller enterprises in the rapidly growing tteokbokki rice cake market.

Ourhome and Shinsegae Food sell tteokbokki HMRs based on rice cakes they produce. But they said they are not very affected because tteokbokki HMR sales account for a very small portion of the company’s entire sales.

The situation is a little different for Dongwon F&B, which just started a production line to produce its own tteokbokki rice cakes in May.

The company uses the rice cakes for its “God of Tteokbokki” HMRs.

Dongwon F&B used tteokbokki rice cakes made by a smaller enterprise when it launched the product in 2016 because the Korea Commission for Corporate Partnership recommended in 2014 that the rice cake manufacturing business was suitable only for small and medium-sized businesses.

Dongwon F&B decided to manufacture them directly this year after the recommendation period ended in 2020.

The company’s goal was to expand tteokbokki HMR sales overseas.

“The production line was designed to expand tteokbokki exports in line with the growing popularity of Korean food abroad,” said a spokesperson for Dongwon F&B.

The company sells the product domestically and in seven countries abroad, including the United States, Japan and Vietnam.

Though the ministry’s restriction is not applied to tteokbokki rice cakes produced for export, the restriction could be a problem if exports experience difficulties, like non-tariff barriers or delays in transportation.

Tteokbokki exports last year totaled $54 million, up 56.7 percent from 2019, according to data from the Korea Customs Service. The growth rate was higher than for kimchi, at 37.6 percent, and ramyeon at 29.2 percent.