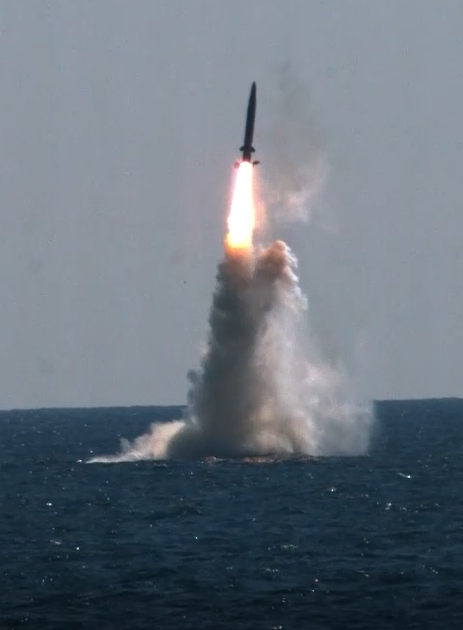 
The Korean Peninsula was the site of dueling launches on Wednesday as North Korea fired two tactical ballistic missiles around mid-day, followed by South Korea testing a new submarine-launched ballistic missile (SLBM) later in the afternoon.

The North fired first on Wednesday, sending two ballistic missiles into the waters east of the Korean Peninsula around 12:38 p.m. and 12:43 p.m., according to the South's Joint Chiefs of Staff (JCS).

The JCS said the missiles flew a distance of approximately 800 kilometers (500 miles) while reaching an altitude of 60 kilometers (37 miles).

Less than three hours later, in the afternoon, South Korea followed with a scheduled submarine-launched ballistic missile (SLBM) test, according to the Defense Ministry.

In addition to the SLBM, the South tested two different types of missiles on Wednesday: a long-range air-to-surface missile and a supersonic anti-ship missile, according to military authorities.

These weapons are expected to serve as a deterrent to nuclear-armed North Korea. Even though the South is equipped with conventional — not nuclear — warheads, they enhance the country's capacity to retaliate or counter an attack.

Wednesday’s SLBM test follows on a previously successful test on Sept. 2, reports of which were not openly confirmed by military authorities at the time, which made South Korea the eighth country in the world to possess the weapon.

South Korea is also the first country without nuclear weapons to possess SLBMs, as the missile technology is typically paired with nuclear warheads and is widely considered vital to maintaining a military’s retaliatory strike capability.

Witnessed by President Moon Jae-in, the SLBM test took place on Wednesday off the coast of Taean, South Chungcheong, under the supervision of the Agency for Defense Development (ADD). 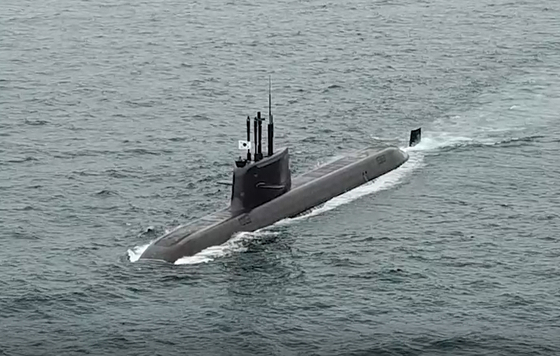 
The SLBM was fired from the Navy submarine Dosan Ahn Chang-ho, as was the case two weeks prior, and took the form of a cold launch, in which the SLBM’s engine ignites after it is first pushed out of the water with air pressure, according to military officials.

“Our possession of an SLBM carries the significance of securing deterrence against omnidirectional threats, and we expect it to play a key role in building our self-defense capability and peace on the Korean Peninsula,” Moon said, according to Blue House spokeswoman Park Kyung-mee.

While denying that Wednesday’s SLBM test was in direct response to the North’s recent missile tests, Moon did say that the South’s SLBM “can be a clear deterrent to North Korea's provocations.” 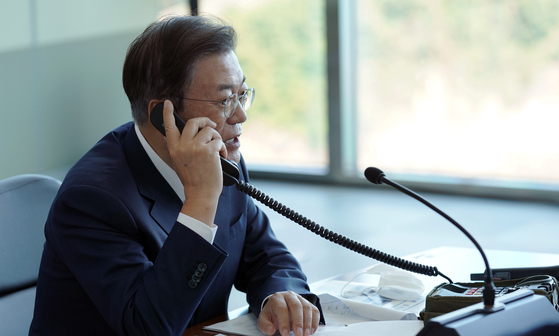 President Moon Jae-in speaks with the captain of the Dosan Ahn Chang-ho shortly after the successful test of the SLBM from the submarine on Wednesday afternoon. [BLUE HOUSE]


“Through the success of various types of missile power launch tests today, we have shown that we have sufficient deterrence to respond to North Korea's provocations at any time,” Moon said.

He urged those working on the South’s missile development program to “continue to do [their] best to build strong defensive capabilities” so that the South “can overwhelm North Korea's asymmetric abilities,” in a reference to the North’s possession of nuclear weapons.

Under United Nations Security Council resolutions, the North is prohibited from testing ballistic missiles. Despite this, the reclusive regime most recently launched ballistic missiles in March 2021, although it conducted a cruise missile test just this past weekend which went unnoticed by South Korean and U.S. military authorities until the North’s state news agency announced it.

Seoul’s missile development program, long constrained by Cold War-era restrictions imposed by Washington, has picked up pace since Moon and U.S. President Joe Biden agreed to lift the missile constraints at their May summit.

The 40-year-old bilateral agreement limited the range and payload of South Korean missiles in exchange for U.S. technological support.

Meanwhile, North Korea’s ballistic missile test on Wednesday was the subject of outrage from the country’s neighbors, who condemned it as a violation of Security Council resolutions.

Japanese Prime Minister Yoshihide Suga called the North Korean launches “outrageous” and claimed they "threaten the peace and security of our country and region.”

While the U.S. military's Indo-Pacific Command in Hawaii said the North Korean ballistic missile test did not pose any “immediate threat,” it described the launch as highlighting “the destabilizing impact of the DPRK's illicit weapons program." DPRK is the acronym for the official name of North Korea, the Democratic People's Republic of Korea.

The ballistic missile tests by the North on Wednesday afternoon follow on the heels of the country’s cruise missile tests over the weekend.


Cruise missile tests are not technically banned under Security Council resolutions because most cruise missiles are not designed to carry nuclear warheads.

Modern cruise missiles are harder to detect and intercept because they are often self-navigating and able to fly on extremely low-altitude trajectories compared to ballistic missiles.

Cruise missiles are also often equipped with sensors to evade interception and active radar homing seekers to guide them to their targets, greatly enhancing their precision.