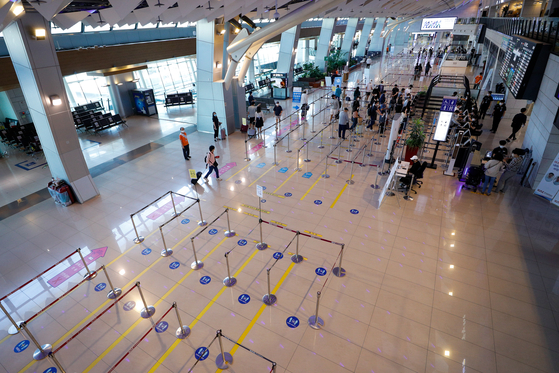 
Budget airlines are competing fiercely to sell domestic flight tickets ahead of the Chuseok harvest holiday. But reservations are still sluggish.

The Chuseok holiday starts on Saturday and lasts through Sept. 22.

Budget airlines are offering some good deals to encourage people planning to go back to their hometowns for the holiday.

Jeju Air is offering one-way tickets between Daegu and Jeju for as low as 12,700 won ($11). The most expensive holiday ticket is between Gunsan and Jeju and that's going for as low as 35,400 won.

The deals are for flights between Sept. 17 and Sept. 30

Air Busan is offering similar promotions, including one-way tickets on domestic flights at prices as low as 14,900 won. The deals were on all routes, including Gimhae-Gimpo, Gimhae-Jeju and Ulsan-Jeju.

Regardless of their deals, budget carriers say the reservation rate during this Chuseok season is lower than usual because of Covid-19.

Jin Air did not reveal specific figures, but Kim Tae-jun, its spokesperson, said, “demand for travel is still low.”

Kim added, “It used to be natural for people to travel during Chuseok season, but that’s not how people think these days, especially at a time when the daily number of Covid-19 cases reaches around 2,000.”

Up to eight people are allowed to gather in the greater Seoul area during Chuseok, on the condition that four of them are fully vaccinated.

Despite the lower demand, some airlines have boosted the number of flights offered during the upcoming holiday to make use of idle planes.

T’way Air added 6,000 seats for a route connecting Gimpo and Busan during the holiday.

These airlines are hoping bookings for domestic flight tickets could jump at the last minute.

“The boarding rate is a more accurate way to measure demand than the reservation rate, especially for routes that are not flying to Jeju,” said Park Seung-sin, a spokesperson for Jeju Air. “This is because lots of people make decision on which transportation to use to visit their hometown at the last minute.”