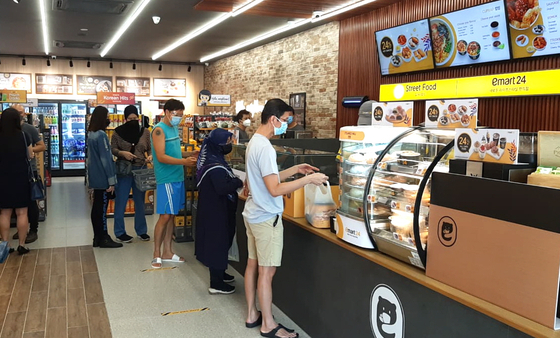 People shop at the third Emart24 store in Malaysia on Wednesday. [EMART24]


The Emart24 convenience store franchise opened its third store in Malaysia on Thursday.

The company started business in Malaysia with a local firm, United Frontiers Holdings, in June.

Emart24 receives royalties from United Frontiers in return for renting its brand and operational know-how.

“The fact that we expanded stores during difficult times caused by Covid-19 is very significant,” said Emart24 in a statement.

The company said branding itself as a premium convenience store helped gain local attention in Malaysia.

Korean food, including Tteokbokki (spicy rice cakes), sweet and sour fried chicken and samgak gimbap, a triangular gimbap, accounted for 50 percent of all sales in the first two branches in Malaysia, according to Emart24.

Korean dried snacks also proved to be more popular at the two branches than Malaysian snacks, according to Emart24.

Expanding overseas has become common among convenience store chains over the past several years.

GS25 runs businesses in Vietnam and Mongolia, while its rival CU operates stores in Malaysia and Mongolia.