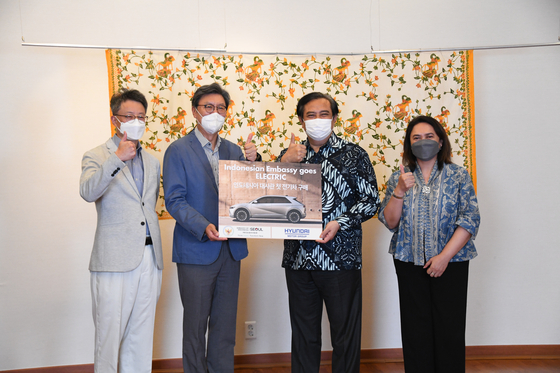 Indonesian Ambassador to Korea Umar Hadi, second from right, poses for a photo with Kim Chang-beom, Hyundai Motor's advisor, second from left, Kim Kyoung-soo, a vice president of Hyundai Motor, far left, and Zelda Wulan Kartika, deputy chief of mission at the embassy, far right, at the Ioniq 5 delivery ceremony on Sept. 15 at the Indonesian embassy in Seoul. [HYUNDAI MOTOR]

The Embassy of Indonesia in Korea purchased a Hyundai Motor all-electric Ioniq 5 as part of its “green transformation” initiative.

A delivery ceremony was held Wednesday at the embassy in Yeongdeungpo District in western Seoul.

The Ioniq 5 is Hyundai Motor’s most advanced purely electric vehicle (EV). It is able to run 429 kilometers on a single charge. It can run 100 kilometers after just five minutes of charging.

The Embassy of Indonesia in Korea has been active in sustainability issues in line with the Indonesian government’s effort to bolster green car-related industries.

The Korean embassy is Indonesia's first to adopt an all-electric vehicle.

“A green transformation is the Embassy of Indonesia in Korea’s goal,” said Umar Hadi, Indonesian ambassador to Korea. “I am happy to work with Hyundai Motor in making changes related to climate change issues."

It was also the first time Hyundai Motor sold an Ioniq 5 to a foreign embassy in Korea.

“We are happy to be part of the Embassy of Indonesia’s goal towards a sustainable society with the Ioniq 5,” said Kim Chang-beom, advisor to Hyundai Motor, who participated in the delivery ceremony on Sept. 15.

“We expect the Ioniq 5 will be adopted by various foreign institutions in Korea.”