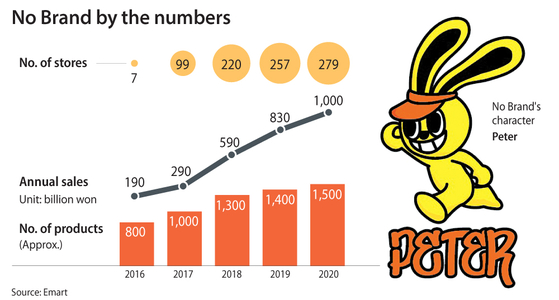 Emart is entering the money-spinning character business with Peter, a yellow rabbit with an orange visor and a penchant for cut-price goods.

The Peter character recently made its first appearance on a mouthwash container label sold by Emart label No Brand.

Fun and games aside, the company hopes Peter will help it move more merchandise and eventually get into the character business, in which popular characters like Kakao's Ryan are used to build marketing empires.

No Brand offers customers various goods, from daily necessities to food items, at sharply discounted prices by eliminating the costs derived from the branding process, as well as minimizing packaging design. Introduced in 2015, No Brand aims to focus on the fact that the essence of consumer products is in quality and price, not brand names.

Shinsegae Vice Chairman Chung Yong-jin highlights that No Brand is a rapidly growing part of the retail group, despite its small size. Chung is the largest stakeholder of Emart with 18.55 percent.

No Brand only has around 75 head office employees, only about one-twentieth of the 1,500 Emart employees. 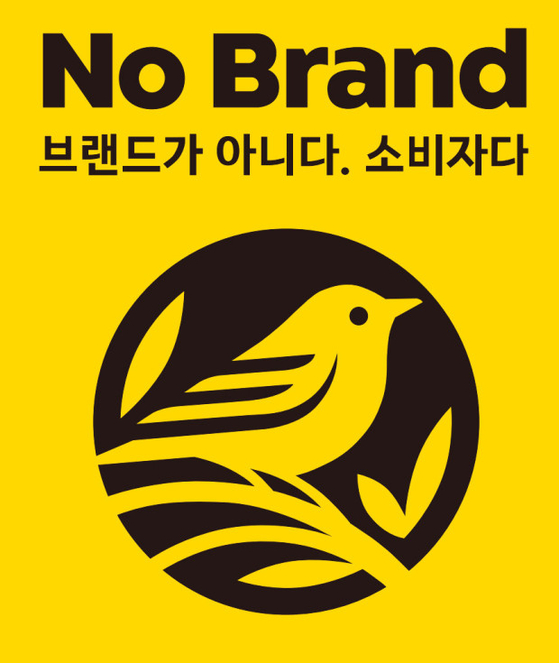 Logo of No Brand [EMART]


But No Brand has been expanding its size dramatically in recent years. It only had seven stores across the country in 2016 but that grew to 279 as of 2020. The number of available products under No Brand, which only had some 800 products like potato chips and wet wipes in 2016, has nearly doubled to 1,500 as of now.

“They are cheap but cannot be looked at as cheap goods," Chung said. "We spent lots of time to find a way to make people feel pride [when buying No Brand products], despite the cheap price tags. We want people who have No Brand products in their Hermes handbags or Mercedes-Benz cars to be recognized as fully conscious consumer.”

Market watchers say the introduction of Peter is Emart's attempt to move toward becoming a content company, rather than just a discount mart chain.

“Until now, the power of retail companies came from price competitiveness and large stock of products,” Chung reportedly said during a meeting with his employees. “Now, the strength comes from value, content and digital.”

Peter is Shinsegae’s second character to be introduced after JRilla, a besuited gorilla sporting a cool hairdo that was introduced in April. JRilla is being marketed as a character that resembles Chung. 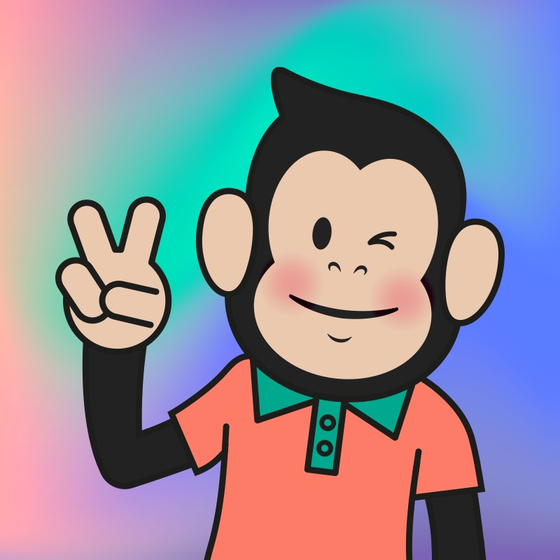 
Emart aims to develop more characters in the future that can be associated with other Emart affiliates like convenience store Emart24.

“Emart will endeavor to establish a strong fandom [for our characters] just like many luxury brands,” said a source from Emart. “As we have platforms like SSG.com, as well as eBay Korea, the character business can create synergy effects with various industries like games and the metaverse.”

In late June, Emart acquired 80 percent of eBay Korea for 3.44 trillion won, significantly raising its presence in the e-commerce market.

eBay Korea controlled 12 percent of the e-commerce market in Korea as of last year, according to data from Kyobo Securities, ranking third after Naver, with 17 percent, and Coupang, with 14 percent. SSG.com, Emart’s online entity, had 2 percent.

No Brand tries No People