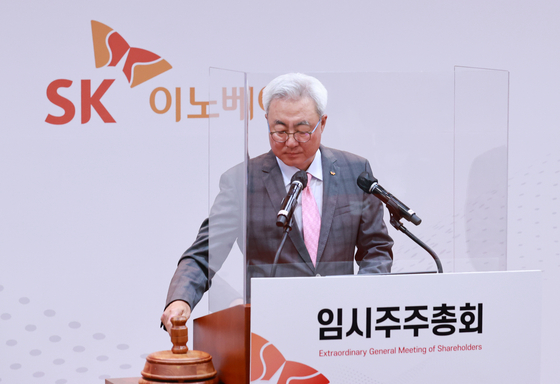 SK Innovation got the nod from shareholders Thursday to split off its battery business into an independent company.

The move is expected to help the company better cope with rising demand for better and cheaper batteries for electric vehicles (EVs).
The decision may also help the company fund an aggressive expansion of battery manufacturing facilities through an initial public offering (IPO) some time in the future.

SK Innovation said 80.2 percent of the shareholders who participated in an extraordinary shareholders meeting Thursday agreed to the split off.

A split-off results in the separated entity's shares being wholly owned by the parent company, compared to a spinoff in which the shares of the new entity are distributed proportionally to existing shareholders.

The National Pension Service, the second largest shareholder of SK Innovation with 8.05 percent, previously announced that it would oppose to the plan. Its opposition, however, was apparently not supported by other shareholders.

“The latest decision to separate the battery business is to get the right market valuation of our new core business and accelerate its growth,” SK Innovation said in a statement Thursday.

“It will also raise value for our shareholders and the company.”

SK Innovation CEO Kim Jun said an IPO for the company will not happen before 2022.

“It is true that we are considering an IPO as a way to secure funds,” Kim told reporters after the meeting Thursday.

“[But going public in the latter half of next year] would be hard. We have a lot to show in our battery business but it takes time. We want to prove that our plans and pledges have actually been done and give confidence to the market that SK Innovation and its battery business will grow in a certain way.”

SK Innovation, which has its roots in oil refining, is a latecomer to the battery market compared to rivals but has been aggressively building battery factories and clinching partnerships with global carmakers.

The company already has or is building manufacturing facilities in Korea, Europe, China and the United States.

Its manufacturing goal is to produce more than 500 gigawatts (GWs) of batteries by 2030, which translates to some 7.5 million EVs. It currently is able to produce 40 GWs of batteries per year.

SK Innovation said that it already has orders for 1000 GWs or 1 terawatt worth of batteries.

SK Innovation says it plans to reach the break-even point in its battery business by next year.