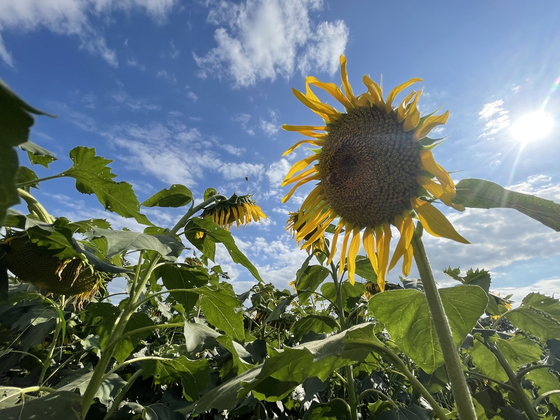 Horogoru Fortress in Yeoncheon County in Gyeonggi is popular thanks to its field of sunflowers. [LEE SUN-MIN]


YEONCHEON COUNTY, Gyeonggi — Enjoy the very last glimpse of summer with the flowers that represent the season in Yeoncheon. Around Horogoru Fortress ruins in the county, locals sow sunflowers seeds so that they can be in full bloom by September.

The yellow petals last until late September, as long as the heavy rains don’t curve the long stems. Usually the best time to check out the sunflowers is early September, but that's also when the area is most crowded. If you don't mind seeing some flowers that are starting to wilt, now is a good time to pay a visit.

The field around Horogoru fortress is home to a sunflower festival that wishes for reunification of the North and South Korea. The festival has been hosted annually since 2014 but will not go ahead this year due to the pandemic.

But some booths have been set up by locals for those visitors who decide to come. The booths sell produce, such as rice and pine nuts, that are grown locally. It is free to enter the fortress area and see the sunflowers.

The fortress was originally built in the Goguryeo Kingdom (37 B.C. to A.D 668), north of the Imjin River, on top of a cliff. The periphery of the entire fortress is only about 401 meters (1315.6 feet). The cliff in the south and north is incorporated into the fortress that’s shaped like a triangle while rocks piled on top of each other in the east make a wall that measures about 10 meters high. The kingdom, which considered the Imjin River as its southern border line for about 120 years until the end of the seventh century, used Horogoru fortress for protection. 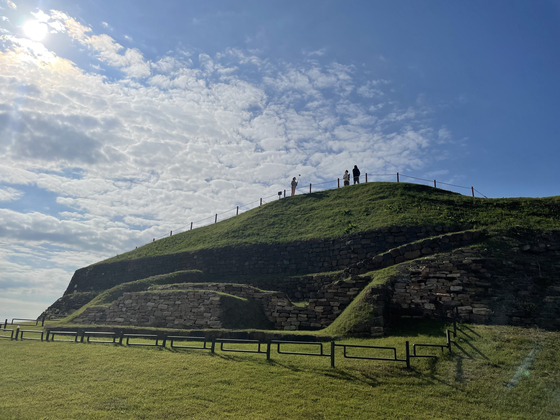 Visitors walk along the top of Horogoru Fortress [LEE SUN-MIN]


Since the area is right by the river and no major mountains separated it from the capital of Baekje Kingdom (17 B.C. to A.D. 660) in the Three Kingdom period (57 B.C. to A.D. 668), it is estimated that the fortress played a key role in protecting the country.

Through a number of excavation projects done over time, many weapons, earthenware containers, ink stones and giwa roof tiles have been found, and these artifacts show that some high-level martial elites resided in the Horogoru fortress.

Currently, the rocky cliff is covered with greenery. There is a stone staircase cut into the side of the cliff, which now looks like a hill with a gentle incline. When you get on top of the fortress, you will have an aerial view of the entire sunflower field, as well as the Imjin River. Right down the cliff is a large grass lawn where many sit to lounge.

Most of the sunflowers are taller than an average adult. They are planted close together so it is not easy to walk into the field. Visitors tend to stand as close as possible to the edge of the field of flowers so that they completely take over the background of their photos. The field isn’t large, but it can take up to thirty minutes to scout the perfect location for your sunflower shot. Other flora alongside the field also welcomes visitors.

Some of the sunflowers close to the trail have been damaged by visitors who pluck out their seeds to make smiling or frowning faces or some who even write their names in the centers of the flowers. Visitors are asked to not take part in this practice.

If you want to see colors other than yellow while in Yeoncheon, head out to Daepssari Park. The county has made a placard of other places to visit including Daepssari Park at Horogoru, as Horogoru is one of the most popular spots that people are drawn to.

It's about a 40 minute drive to get to Daepssari Park from Horogoru fortress. The park is planted with kochia scoparia grass, known in Korean as daepssari, and other colorful flowers to bring attract visitors from other regions. The park is also free to enter.

While the county is already well-known with sunflowers, the park itself is relatively new. The county opened this park to the public from August. Some 22-thousand kochia scoparia plants were installed around the Samgonni Stone Mound Tomb, which is about 30,000 square meters large. This type of grass is usually green in the summer, but changes color to pink when it gets colder in the fall. 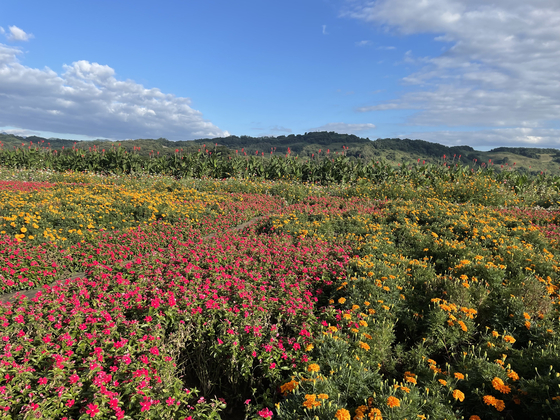 
Besides the grass, the park houses many colorful flowers like marigolds, garden zinnia, or amaranth. One area is entirely covered with orange cosmos. This area is filled with great photo opportunities so visitors can take snapshots surrounded by blooms.

The park offers umbrellas for visitors who want to remain in the shade as they walk through open areas and the colorful brollies also make a great photo prop.

Further into the park you will see a stone mound tomb made in Baekje. There are large, round stones scattered in this area which experts say people at the time would have had to bring to the area by hand. This tomb is alongside the Imjin River, and there are more can be found every 7 kilometers (0.6 miles) or so. Experts believe people lived with their families close by the Imjin River.

Because the tomb is located in a raised area within the park it makes a great vantage point to see all the colorful flowers and grass in bloom. More visitors are expected in the coming weeks when the kochia turns pink.

Blue skies after the storm