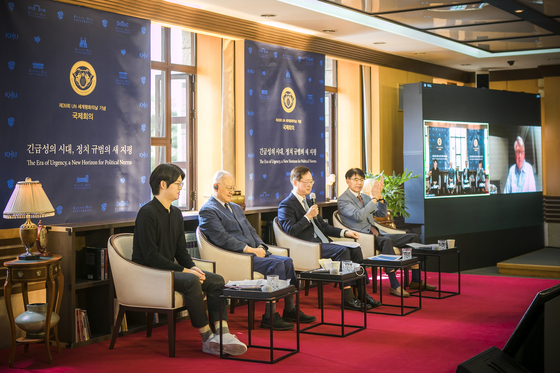 The main theme for this year is “No Time to Lose, A Quest for Immediate Action for Planetary Crisis.” The event will set the stage for discussions to explore the civilization emerging from this global sense of crisis, in areas such as climate change, resource depletion, virus outbreaks, life extinction, social polarization and inequality, and moving toward a new transitional civilization.

The UN International Day of Peace was first proposed by Kyung Hee's founder Dr. Choue Young-seek in July 1981 at a meeting of the International Association of University Presidents (IAUP) and was unanimously established that November by the 36th session of the UN General Assembly.

The Peace BAR Festival celebrates humanity's efforts toward overcoming conflict and confrontations to work toward peace and mutual prosperity. This festival began in 2004 with the groundbreaking ceremony for the UN Peace Park and Global NGO Complex, which was an extension of the 1999 Seoul International Conference of NGOs co-hosted by Kyung Hee University, UN NGO/DPI and CoNGO. BAR is an acronym for the 60-year tradition of pursuing a 21st century society that is "spiritually Beautiful, materially Affluent, humanly Rewarding."

The program details of the Peace BAR Festival 2021 are as follows.

The festival has organized a series of talks in commemoration of the International Day of Peace that invites some of the world’s best minds to diagnose the problems of modern civilization and share their thoughts on the construction of a new future-oriented, global, democratic governance for the world’s common good.

The first session of the dialogue series will start at 5 p.m. and run until 6 p.m. under the theme of “The Crisis of Civilization on Earth and a Revolution of Consciousness.” Dr. László will address the urgency of "mindset or consciousness shifts" as a prerequisite for successfully tackling the crisis of modern civilization and setting a new course of evolution for the future with Shin Chung-shig, professor at Kyung Hee University Humanitas College.

The second session of the dialogue series will be held on Oct. 15 from 10:30 a.m. to 11:50 a.m. under the theme of “Are Homo Sapiens destined to be trapped in the myth of unlimited growth or do they have the potential to transform themselves?” It will feature Dr. Paul R. Ehrlich, an emeritus chair professor of the department of Biology at Stanford University and Choe Jae-chun, chair professor at Ewha Womans University — who will offer insights into the destiny of Homo sapiens trapped in the myth of limitless growth. Scholars warn that Earth’s capacity to support the coexistence of people and nature that has continued since time immemorial is nearing a breaking point. The dialogue will shed light on what kind of earth knowledge and practices are needed to save human society from the possible crisis.

The third session will be held on Oct. 29 from 10:30 a.m. to 11:50 a.m. under the theme of “The Arrival of Extraterrestrial Intelligence in the Solar System: Will the Identity and Destiny of Earth be Rewritten?” This dialogue will feature astronomy Prof. Avi Loeb of Harvard University, who has championed research challenging Earth-centered conventional views on the universe, and physics and astronomy Prof. Lee Hyeong-mok of Seoul National University. Dr. Loeb’s discussion of the possible existence of space aliens will set the stage for rethinking our astronomical views and pondering the meaning of human civilization in the broader context of the universe, which will lead to an exploration of ways to restructure human knowledge systems to suit alternative takes on the cosmos.

The fourth series will be held on Nov. 26 from 10:30 to 11:50 a.m. under the theme of “The Age of Climate Change: How can we survive the crisis?” The presenter for this dialogue will be Dr. Hans Joachim Schellnhuber, founding director of the Potsdam Institute for Climate Impact Research, also presided by Cho Cheon-ho, special professor of Future Human Science School in Kyung Hee Cyber University. Dr. Schellnhuber will discuss the threat of the climate change age and the breaking point at which the Earth's system will no longer be able to support its inhabitants. The dialogue will be an opportunity to contemplate the apocalyptic scenarios about Earth’s climate system and what can be done to head them in the direction for a healthier Earth down the road.

The fifth and final of the dialogue series will wrap up the program with discussions under the topic “No Time to Lose, A Quest for Immediate Action for Planetary Crisis - Declaration for the Future Human Society.” This series will discuss how to reset the future direction of human civilization to successfully cope with the multitude of threats it faces and design a new global governance system suitable for a more sustainable future human society. The wrap-up roundtable will take place on Dec. 17 from 10:30 to 11:50 a.m.

All sessions during the Peace BAR Festival will be held via video conference and can be watched on the website (pbf.khu.ac.kr/). Video recordings will also be made available on the official Kyung Hee University website.