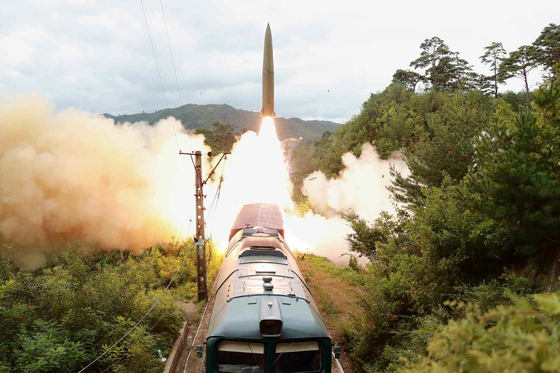 A ballistic missile is fired from a train-borne missile regiment in an undisclosed location in North Korea on Wednesday. [NEWS1]


The North's official news agency on Thursday revealed that its latest ballistic missiles were fired from a train-borne launcher, following Pyongyang's criticism of Seoul late Wednesday for labeling the missile tests as provocations.


Kim Yo-jong, the sister of North Korean leader Kim Jong-un and director of the propaganda department of the ruling Workers’ Party, released a statement late Wednesday blasting South Korean President Moon Jae-in for calling the North’s tests as a “provocation” and threatened a “total deadlock” of inter-Korean relations.

The statement was released after Moon attended the test-launch of a domestically developed submarine-launched ballistic missile (SLBM) from the Navy submarine Dosan Ahn Chang-ho and delivered remarks that called the successful test a sign that South Korea has a “sufficient deterrence to respond to North Korea’s provocations at any time.”

Kim called Moon “too stupid” to be the president of a country and warned that inter-Korean relations will end up in a total deadlock if Moon continues to support “the act of faulting and hurting the dialogue partner,” while adding that this was not what the North desired.

Even as Pyongyang lambasted Seoul’s attitude towards its weapons program, its state news agency detailed the delivery method employed in its missile tests.

“The railway-borne missile regiment took part in the drill with a mission to strike the target area 800 kilometers [500 miles] away from its location after moving to the central mountainous area at dawn on September 15,” reported the Korean Central News Agency (KCNA).

The official news agency said the missiles accurately struck the target in the East Sea.

Unlike the cruise missiles the North tested over the weekend, the ballistic missiles appear to have been launched from a train instead of a transporter erector launcher (TEL), a type of vehicle which transports, prepares and fires a missile.

The South's Joint Chiefs of Staff (JCS) said that the North fired two ballistic missiles into the waters east of the Korean Peninsula around 12:38 p.m. and 12:43 p.m. on Wednesday. The missiles flew a distance of approximately 800 kilometers while reaching an altitude of 60 kilometers.

Both train-borne launchers and TELs enhance the North’s ability to fire missiles without prior detection by South Korean and U.S. intelligence as they do not require a long period of preparation in a stationary location.

Unlike the North’s missile tests on March 21 and 25, when authorities detected the North’s tests but did not release the news for several days, both South Korean and U.S. military authorities were reportedly unaware of this past weekend’s cruise missile tests before the KCNA released a report on Monday, according to a government official who admitted to the intelligence lapse on Monday to the JoongAng Ilbo on the condition of anonymity.

The official revelation of the weekend cruise missile tests from the North’s state news agency reportedly “shocked” the South Korean military and government, according to the official.

Experts view the addition of cruise missiles to the North’s arsenal as a potentially lethal upgrade to its ability to neutralize South Korean defenses in the event of war because such weapons can surgically target radar systems to blind missile defense systems.

Modern cruise missiles are also harder to detect and intercept because they are often self-navigating and able to fly on extremely low-altitude trajectories compared to ballistic missiles.

Under United Nations Security Council resolutions, the North is prohibited from testing ballistic missiles, such as the ones it fired on Wednesday, but not cruise missiles.

While condemning the North’s defiance of the UN Security Council by conducting the ballistic missile tests, the United States reiterated Thursday its readiness to engage with the North in dialogue.

“We do condemn the DPRK’s missile launches. These missile launches are in violation of multiple UN Security Council resolutions,” said State Department spokesman Ned Price. DPRK is the acronym for the North’s official name, Democratic People’s Republic of Korea.

Although the U.S. military's Indo-Pacific Command in Hawaii said the North Korean ballistic missile test did not pose any “immediate threat,” it described the launch as highlighting “the destabilizing impact of the DPRK's illicit weapons program."

That assessment was repeated by Price, who said, “We know that [the missiles] pose a threat to DPRK’s neighbors and other members of the international community.”

However, Price added that the United States is “committed to a diplomatic approach to the DPRK, and we call on the DPRK to engage in a meaningful and substantive dialogue with us.”

Price said that Pyongyang remains unresponsive to Washington’s diplomatic efforts, but said the U.S. will continue to attempt engagement with the North.

“We are saying that we continue to believe that diplomacy is the means by which we can achieve the goal that our policy review identified, and that is the denuclearization of the Korean Peninsula,” he said.

The spokesman also emphasized the strength of U.S. security ties with its allies in the region, including South Korea.

“Our commitment to our allies, including Japan and the Republic of Korea, is iron-clad,” said Price, using South Korea’s official name.