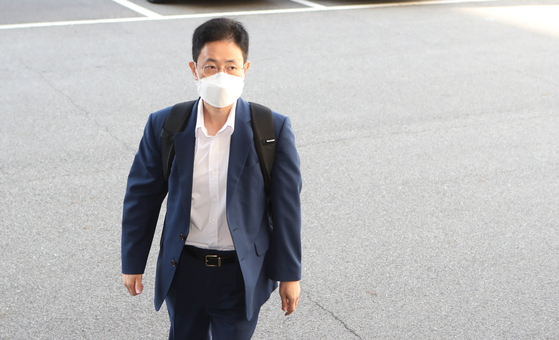 
The Seoul Central District Prosecutors' Office launched an investigation into the allegations that presidential contender Yoon Seok-youl meddled in last year’s general elections less than a week after the state anti-corruption investigative body opened its probe into the former prosecutor general.

The Supreme Prosecutors’ Office since Sept. 3 has been conducting an internal probe into allegations that Yoon, the frontrunner candidate for the main opposition People Power Party (PPP), during his time as prosecutor general had been involved in a senior prosecutor conveying to the opposition party criminal complaints against pro-government figures ahead of the April 2020 general elections.

The Corruption Investigation Office for High-ranking Officials (CIO) also launched an investigation on Sept. 10 into Yoon, who faces accusations of power abuse, disclosure of official secrets and violation of the personal information protection act and public official election law.

Thus, a two-track probe involving both the prosecution and the CIO into the allegations are in full motion. Some overlap is to be expected in the investigation, as they involve the same players, but there is also room for cooperation.

Newsverse, an online news outlet, first reported on Sept. 2 that Son Jun-sung, a high-ranking prosecutor close to Yoon, shared drafts of criminal complaints against journalists and political figures affiliated with the ruling party with Kim Woong, a prosecutor-turned-politician who managed the general election campaign for the opposition United Future Party (UFP), ahead of the general elections on April 15, 2020. The UFP is the predecessor of the PPP.

Yoon is accused of encouraging Son, who was chief of investigative information policy at the Supreme Prosecutors’ Office, to work with Kim to derail the campaigns of ruling Democratic Party (DP) candidates by encouraging the UFP to lodge criminal complaints against pro-government figures including: Rhyu Si-min, chairman of the Roh Moo-hyun Foundation; Choe Kang-wook, a proportional representative and head of the liberal Open Democratic Party (ODP); Hwang Hui-seok, also a member of the ODP; and MBC and Newstapa reporters and staff. Son is now a senior official at the Daegu High Prosecutors’ Office, while Kim is currently a first-term lawmaker for the PPP.

Yoon has rejected the accusations.

Choe Kang-wook of the ODP earlier this week filed a complaint against seven people including Yoon, Yoon's wife Kim Keon-hee and Prosecutor Son for accusations including abuse of power and violation of personal information protection and public official election laws.

The Supreme Prosecutors’ Office confirmed Thursday that it had assigned the case to the Seoul Central District Prosecutors' Office Tuesday.

While both the Seoul prosecutors and CIO are in the initial stages of their investigation, as the matter deals with political meddling, there is expected to be triangular cooperation with the Supreme Prosecutors’ Office in the process.

Yoon in turn has filed a complaint against Park Jie-won, chief of the National Intelligence Service (NIS), and Cho Sung-eun, the key whistleblower in the allegations.

The PPP has accused Cho, a former deputy chief of the election committee of the UFP, of conspiring with the NIS chief to smear its presidential contender.

Cho met with Park on Aug. 11 at a hotel restaurant in central Seoul about a month before the Newsverse report, leading to allegations that the NIS chief had been coaching her. She rejected allegations of Park's involvement and claimed the Aug. 11 dinner was a “private” meeting.

However, Cho confirmed to JTBC Wednesday that they met again later that month, saying “There is no need to deny that we met. I remember we met around the end of August.”

Park has also rejected allegations of any NIS political meddling in a CBS radio Tuesday, asking “Why step on a sleeping tiger’s tail?”