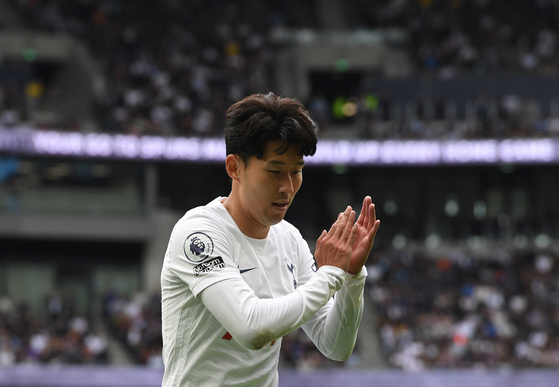 Son Heung-Min of Tottenham reacts during an English Premier League match between Tottenham Hotspur and Watford in London on Aug. 29. [EPA/YONHAP]

Spurs is scheduled to face Chelsea FC at home on Sunday but whether Son and the two other players will be joining the team remains is unclear.

"I cannot say," Nuno said. "They are improving, day by day they are better, but alongside the South American players, we still have to assess."

Son flew back to England on Sept. 8. to rejoin Tottenham Hotspur after an injury-stricken week playing with the Korean national team. 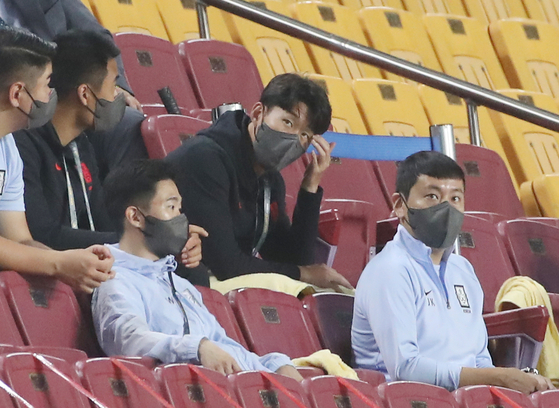 
After playing full time in Korea's match against Iraq on Sept. 2, Son sat out Korea's game against Lebanon on Sept. 7, after complaining of discomfort in his right leg during training the day before. He was later diagnosed with a strained right calf and spent the game in the stands watching Korea struggle to a slim 1-0 win.

Though the Korea Football Association made it clear at the time that Son's removal from the game was purely precautionary, head coach Paulo Bento later confirmed that Son had first felt pain during training, prompting the coaching staff to rest him on the game against Lebanon.

Even after arriving back in England, Son's injury proved serious enough to make him sit out the match against Crystal Palace on Saturday, when Tottenham dropped their first match this season 3-0.

Injuries have been an increasing issue for Son in recent years. After a few years with very little trouble, Son sat out six Premier League games in the 2019-20 season when his arm was fractured in a game against Aston Villa. Last season he also missed six games through a series of Hamstring injuries.

Tottenham's next two Premier League games will all be London derbies — against Chelsea on Sept. 19 and Arsenal on Sept. 26.

As well as those two important games, Son will also want to be fit for Spurs' Carabao Cup game on Sept. 22 against Wolverhampton Wanderers, his first chance to face off against Hwang Hee-chan since the younger Korean star joined the Premier League.

Sorry Sonny, you'll have to wait a bit longer to meet the Wrexham boys