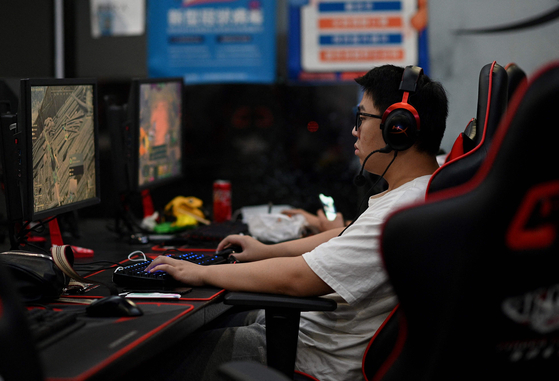 A man plays an online game at a computer shop in Beijing on August 31, 2021, a day after China announced a drastic cut to children's online gaming time to just three hours a week in the latest move in a broad crackdown on tech giants. [AFP/YONHAP]

The Chinese government announced on Aug. 30 that minors under the age of 18 will only be allowed to play online games on Fridays, weekends and holidays, from 8 to 9 p.m. each day. This limit is a tightening of the existing 90-minute per day regulation that had been in place since October 2019 and is aimed at curbing juvenile game addiction.

While not taking direct aim at the Korean market, the regulations have had a ripple effect as seen in the fall of stock prices of game companies in recent weeks.

Tighter regulations within China mean fewer players for Korean games in China, while at the same time Chinese game companies opt for new sources of revenue overseas — namely Korea. This is likely to result in user exodus and thus a decrease in revenue for Korean companies, according to experts.

“It may seem like the regulations are targeted just at teenagers, but it can actually freeze the whole game market,” said Choi Sam-ha, a professor of game design and marketing at Sogang University.


A lasting impact, harder for some 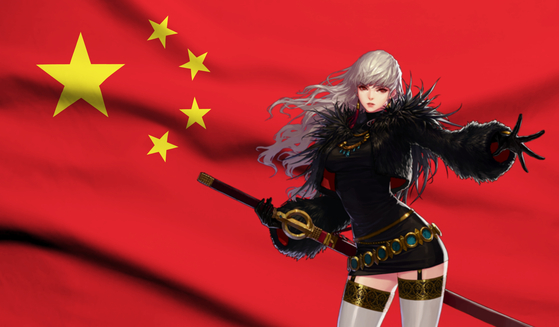 Nexon's online game Dungeon Fighter has been one of the most popular PC games in China, but the government did not issue a license for the mobile version. [JOONGANG ILBO]


Korean game companies that rely heavily on Chinese users will be hardest hit by the latest policy.

Of Korea’s so-called 3N companies NCSoft, Netmarble and Nexon, although Nexon is listed on the Tokyo Stock Exchange, Nexon relies the heaviest on China.

Popular games from other major game companies such as NCSoft, Netmarble, Krafton and Pearl Abyss are either R-rated and thus immune from the recent regulation, or target other markets such as Europe and the United States.

Nexon's online video game Dungeon Fighter has been one of the most popular games in China ever since its release in 2005, but the mobile spinoff has not been licensed by the government yet.

While only 7 percent of Netmarble's revenue came from overseas between 2017 and 2020, including China and its neighboring countries, and NCSoft saw hardly any revenue from ovearseas, 57 percent of Nexon's revenue generated from online PC games came from China during that period.

An official from Nexon said that the company doesn’t have specific plans yet and will “monitor the aftereffects of the policy” to take appropriate measures.

“Game companies that mostly focus on massively multi-player roleplaying games (Mmorpg) are seeing less damage because those games are R-rated in China due to gambling aspects,” said an insider at a game company who wished to remain anonymous. “Since the new policy is aimed at games for minors, Korean Mmorpg games are not seeing immediate change.”

Krafton, who has one hit game Player Unknown’s Battlegrounds (PUBG), is similarly seeing less damage because PUBG is R-rated in China. In fact, it has been gaining since Sept. 10 to close at 493,500 won on Friday.

Pearl Abyss, which services Mmorpg Black Desert, acquired the license to publish its game in China earlier this year and is also seeing a smaller decrease in stock price compared to the 3N companies.

“Investors should refrain from overly concerning themselves with the new regulation in China,” read a Sept. 10 report from Korea Investment & Securities, explaining that the regulation is only aimed at gamers under the age of 18 and so it won’t bring much change.


Pushing through the storm 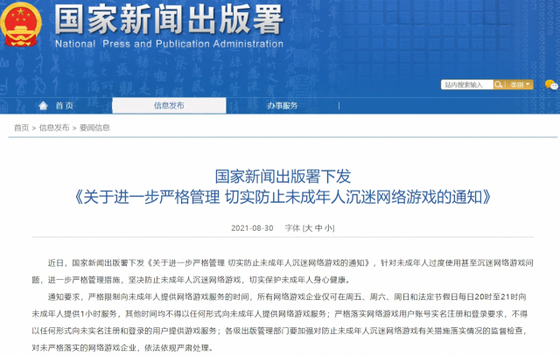 The National Press and Publication Administration of China announced on Aug. 30 that minors under the age of 18 will only be allowed to play online games only on Fridays, weekends and holidays, from 8 to 9 p.m. each day. [SCREEN CAPTURE]

The new policy may be a sour lemon, but Korean companies can make lemonade if they take the chance to venture into other countries and on new types of games, experts say.

Over half of Korean games’ exports depend on the Greater China region, which includes China, Hong Kong and Taiwan.

“If the Chinese government decides to keep the regulations long term, then it’s likely that Korean game exports will decrease even more in the future,” said Kim Jung-tae, a professor at the School of Game at Dongyang University. “For game companies to survive this tsunami, they will have to start putting their eggs in different baskets and look for export opportunities in countries other than China.”

Smaller companies are likely to be hit harder than larger companies, added Kim.

The 3N companies have the capital to lay low for a while or venture into new markets, which smaller companies cannot afford to do, he said.

One way to survive in the Chinese market would be for game companies to develop different games for children and adults. China may be taking a drastic move to curb teenage game addiction, but other countries are also looking for more lenient ways of doing so, which means the children’s games market may shrink as a whole.

“Games are also increasingly becoming sources of conflict in families because they stay at home longer due to Covid-19,” said Kim Sang-hyun, director of the Kocca’s Beijing Business Center. “The change in the global gaming market demands that game companies develop more than just one type of game, which smaller game companies have more trouble doing.”

This could sound an alarm bell for Korean game companies that have been relying on similar game formats and marketing strategies until now, experts say.

“This could be, and very well should be, the chance for them to start over and diversify their business models,” said Kim Young-jin, professor at the School of Game Content at ChungKang College of Cultural Industries. “Game companies have the potential to develop cutting-edge technologies like metaverse, cloud servers, artificial intelligence and more. This could be the chance for them to jump into those new fields.”