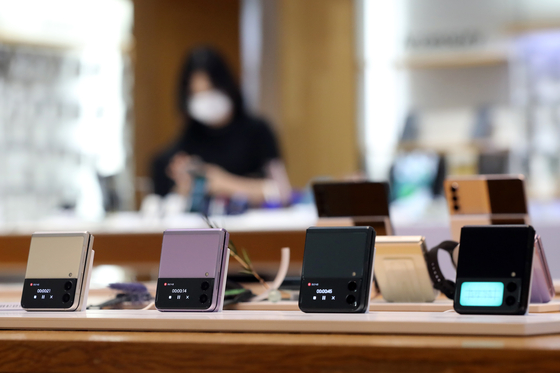 
Samsung Electronics' new foldables are raking in so many orders the company can't keep up with demand.

The Galaxy Z Flip 3 is proving particularly popular, accounting for 70 percent of the orders.

Among the different color options — lavender, cream, green and phantom black — lavender has been most popular and is now hard to get.

With the surge in orders for Samsung's third-generation of foldables, some customers are still waiting for their phones.

Customers who registered their foldables by Aug 27 were eligible for gifts and benefits such as Galaxy Buds 2 wireless earphones, a Samsung Care+ plan offering a one year free warranty and phone cases. Samsung announced on Sept. 14 that the deadline was extended to Sept. 30 for customers who didn't get their devices.

“Even Samsung Electronics didn’t expect [the foldables] to be this popular,” said an official at a different electronics company. “There’s a shortage because the pre-orders surpassed the number of devices Samsung had in stock.”

Matching supply and demand may not be easy with the ongoing global chip shortage.

“The initial response to foldable smartphones is above expectations and we expect 6.7 million foldable smartphones to sell this year, which is more than twice as many as last year’s 2.4 million,” said Park Kang-ho, an analyst at Daishin Securities. “However, smartphone sales may actually slow down compared to the first quarter due to the chip shortage and no [plans to launch] the Galaxy Note 21.”

While Samsung is struggling with supply, Apple revealed four iPhone 13 models on Sept 14. With their new releases coming at around the same time, competition between the rival smartphone makers is expected to heat up.

On the day of Apple’s launch event, the Samsung Mobile US Twitter account uploaded various tweets apparently aimed at the new iPhones.

One of the account's tweets read, “Now how much cooler would that be if it could fold in half?” and “Imagine still having a notch in 2021 – Galaxy Z Fold 2 5G.”

Another tweet read, “We’ve been refreshing at 120Hz for a while now…,” referring to iPhone 13 Pro and the Pro Max’s newly improved 120Hz refresh rate.

Apple's remarks at the iPhone launch could have been aimed at Samsung. The company compared its A15 Bionic chip to a chip of a "leading competition," and many assumed the competitor to be Samsung.

"A15 Bionic included our most powerful graphics ever with a new 5-core GPU," said Greg Joswiak, Apple's senior vice president of worldwide marketing, during the Apple Event. "It provides up to 50% faster graphics performance than the leading competition."