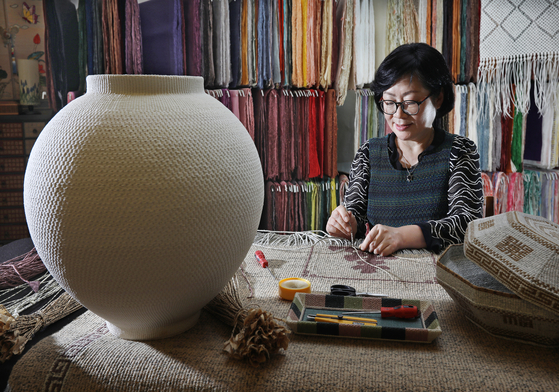 Hong Yeun-hwa, a master of jiseung, a type of paper craft, is making a moon jar at a studio in Seongnam, Gyeonggi. [PARK SANG-MOON]


Traditionally in Korea, paper was used for more than just a medium to write things down.

Sheets of paper were layered together to create a variety of craftworks, one of which is called jiseung. Hong Yeun-hwa who is a master of Seongnam city’s traditional craftworks is one of the experts trying to hand down the tradition of making jiseung to the next generation.

To make jiseung, hanji, or traditional Korean paper, is cut into long, thin strips. The paper is then twisted so that it takes on the appearance of string which can then be used to make items like pillows, pencil cases, sitting mats or cushions.

In times gone by, some Koreans even used the jiseung technique to make items for battle like containers for arrows and paper armor.

However, because paper is the main material for jiseung, such relics are easily damaged or destroyed. Therefore, the jiseung items that remain today are mostly those made and used toward the end of the Joseon Dynasty (1392-1910).

Hong, who is now 61-years-old, first became interested in paper craft in 1985 and turned her interest into a hobby. But she soon realized that her personality was a great fit for this type of craft and that she also had some natural talent.

She then decided to quit her job and focus full-time on making hanji. In 1986, she established her own studio to make hanji and started creating everyday items using the jiseung method.

It was about 10 years ago when Hong decided to focus solely on jiseung craft and put hanji-making aside. She felt that it is her responsibility to keep the dying tradition alive, as such technique has become something outdated with industrialization. The fact that there is only a few jiseung craftspeople in the country really pushed her to continue the craft.

To further study the craftwork and understand the skills that go into making jiseung pieces, Hong is always on the hunt for any items made of jiseung. She visits museums that have such works on display to check them out up and close and personal, and has traveled across the nation on her jiseung journey. Hong has also studied books and articles she's found online on the craft as well as any relevant records.

Hong mastered the art of jiseung from Jeon Seong-im, the director of a museum called Grasses & Straw Craft located in Gyeonggi’s Gwangju, and also from her late father, who used to make everyday items for his household with jiseung.

What she thinks is most important is the base material, which is hanji. The paper needs to be sturdy as she needs to twist it. Hence, Hong prefers to make a special order of paper that is rich with mulberry fiber. What she favors the most is white paper that has some letters printed on. To make crafts that are colored, she also uses dyed papers from time to time.

Hong aims to make her paper twists about one centimeter (0.03 inch) to 1.5 centimeters thick. If the string is too thick, it takes less time to make items, but the end products aren't as refined. When the string is thin, it takes much longer, but it is much easier to pay more attention to the details. Hong prefers such thinner strings to create her own works.

Depending on the size of the item she is creating, the process can take anywhere from six months to a year to complete. As the process is so time-consuming and takes so much patience, Hong describes it like meditation. She says she often gets lost in the process when she is creating jiseung, which is one of her favorite aspects of the craft.

Hong has recreated some 50 works, including arrow containers, clothing boxes, sitting mats and cushions. She also applies other techniques like lacquerware to create a variety of items for the home.

Baru, or a food container, is one of the items Hong recreated. She got her inspiration from baru made by activist An Chang-ho (1878-1938) during his time in prison when he was imprisoned by the Japanese for fighting for Korea’s independence from Japan's colonial rule. Hong added red colors to make the baru more modern.

Hong also participated in “Constancy & Change in Korean Traditional Craft 2019” held in Milan to share jiseung with the world. She recalls that international experts were shocked and amazed by Korea's jiseung.

To continue sharing the craft with the world, her works are on display for ongoing “2021 Gwangju Design Biennale,” scheduled to run until Oct. 31.

Given that things that are not used often become obsolete no matter how important they are, Hong is doing her best to keep the public's attention and has been exploring more modern techniques to keep the centuries-old practice alive for generations to come.