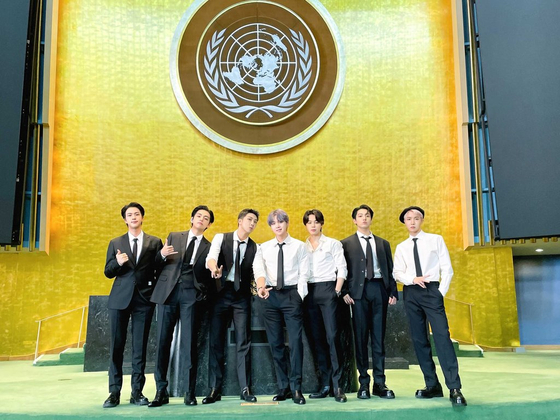 BTS poses for a photo at the U.N. General Assembly Hall in New York on Monday as special presidential envoys for future generations and culture. [BTS TWITTER]


The members of BTS spoke at the United Nations Monday encouraging the youth of the world to be hopeful through the pandemic and look toward the future.

As special presidential envoys for future generations and culture, they offered their words of support at U.N. headquarters, New York, for the Sustainable Development Goals Moment a day ahead of the opening of the 76th U.N. General Assembly.

The event was livestreamed on the U.N.’s YouTube Channel, with 1 million viewers tuning in to the K-pop act’s speeches.

President Moon Jae-in introduced the band as an “exceptionally outstanding group of young men who are connecting with youth around the world.”

The band spoke for a total of seven minutes, with each of the seven offering their own word of wisdom and encouragement.

“Even though it feels like I’m ready to move forward, the world seems to have stopped altogether, and it feels like we’ve lost our way,” Jungkook said. “There were times we’ve felt that way.”

“That’s why I heard that people refer to those in their teens and 20s as ‘Covid’s lost generation,’” RM said. “Because they’ve lost their way in a time when they need the most diverse opportunities and trials. But can we really define them as lost because they’re going on paths that can’t be seen by grownup eyes?”

“In that sense, I think the title of ‘welcome generation’ is much more suitable for them than the lost generation,” Jin said. “In the sense that they’re moving forward saying ‘welcome’ instead of fearing change.”

The members went on to emphasize that it’s the choices of young people that matter in the end despite the circumstances. The band revealed all seven members have been fully vaccinated to go to New York.

“I think of the vaccination as a kind of a ticket to come to this place to meet our awaiting fans,” RM said.

After their speech, a special performance video of “Permission To Dance,” the band’s latest hit English-language single, was aired. It showed them singing and dancing along to the song in the General Assembly Hall and around other parts of the U.N. headquarters.
About an hour after their appearance, the number of viewers dropped to fewer than 50,000 as fans left the livestream.

The K-pop act sat down for an interview with ABC News to talk about the its new role as Korea’s presidential envoys for public diplomacy. The interview will begin airing on Friday on “Good Morning America.”