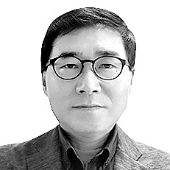 The author is a professor of modern aesthetics and philosophical anthropology at Hongik University.


I had spent the last year in Berlin as a professor at the invitation of a German university. The process of getting a visa was not easy. A second wave of Covid-19 swept Germany from October last year. At its peak, the daily count of new infections reached over 30,000 and deaths over 900.

On Nov. 2, German Chancellor Angela Merkel announced a uniform lockdown across the country. All shops and institutions except drug stores, hospitals, gas stations and grocery stores were shut. Public spots like restaurants, hotels and shopping malls all had to close. The intensive lockdown lasted until the end of May. Berlin, the country’s capital and the center of culture and arts, turned into a ghost city.

While forced to stay at home throughout the cold and barren winter and spring, I had been impressed by three things in Germany. The first was the discretion the German government paid to decide whether to allow students go back to school. After a lengthy debate, the government came up with guidelines that instructed primary, middle and high schools to entirely open when the infection rate was less than 0.1 percent of the population, while allowing them to accept a half of their students by turns when the infection rate was between 0.1 percent and 0.15 percent.

Students had to wear masks all time and take self-antigen test for Covid-19 twice a week with the help of teachers. The quick test lacks accuracy of the authorized polymerase chain reaction (PCR) test in Korea, but can help curb the spread by quickly identifying infections without symptoms in 15 minutes. 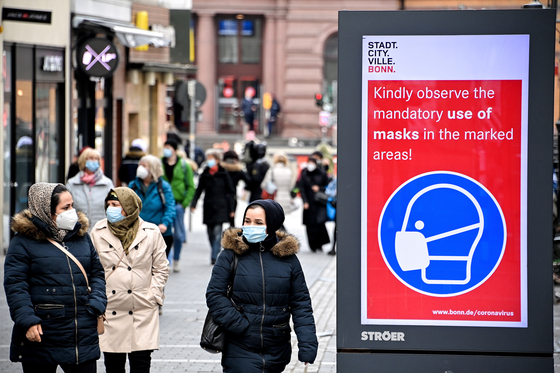 Pedestrians walk past a sign indicating that masks are mandatory in the marked areas in Bonn, Germany, March 13. In Germany, many stores that had been closed for months have opened again. [EPA/YONHAP]

Even now, to enter mass-use locations like restaurants in Germany, customers must meet at least one of the “3G rules” — Getestet, Genesen or Geimpft — which respectively refers to people: who tested negative with a rapid test that day; who are fully recovered from Covid-19; or who were fully vaccinated. A heated social debate discussing the pros and cons of a school lockdown underscored how the German society prepared for an age of living with a virus threat.

The second was the attention the city paid to difficulties performers and artists suffered during the lockdown. There had been more than two news items devoted to their hardship by a public TV each week. Outsiders could think that the country can afford to take special care of artists. But it is not just an issue of money. The public TV covered the society under Covid-19 lockdown in detail and with balance. Without such sense of balance and discreetness, it could not have paid so much attention to the hardships of artists who would otherwise have been neglected.

The third is the German people’s love for books. During the universal lockdown, libraries and bookstores were first to open. Public libraries were open for a half day (in the afternoon) twice a week. Bookstores accepted masked customers.

Even under rigorous distancing measures, Germans kept up cultural welfare infrastructure and affection for books. Town bookstores became relief and comfort for the community and stayed lively exhibiting new releases every week.

There is no knowing when the Covid-19 will end. The fight over livelihoods has become more painstaking and the mind has become fatigued by endless anxiety and scare. It is why the post-Covid-19 era must be prepared for discreetly and meticulously. Schools, culture, arts and books may not look urgent. This could be far more important than simply picking up the Covid-19 relief check of 250,000 won ($211) as in Korea.