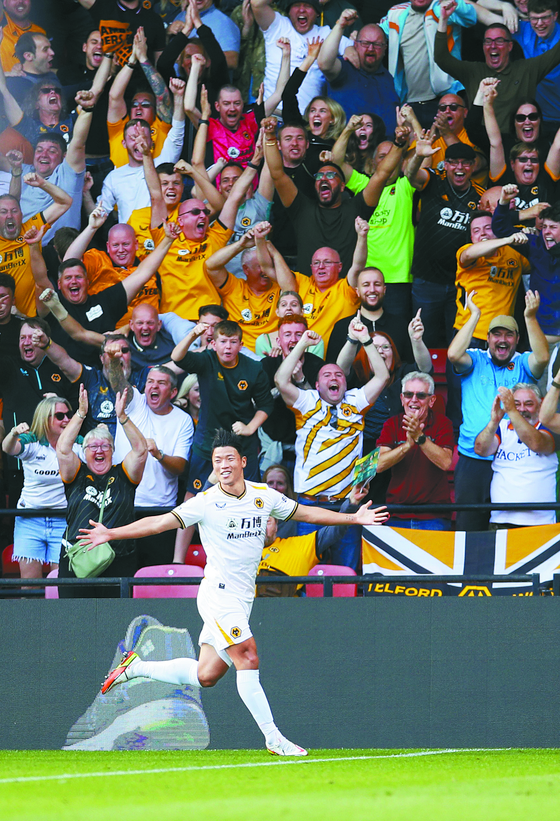 Hwang Hee-chan celebrates after scoring in his debut game for Wolverhampton Wanderers against Watford on Sept. 11. [REUTERS/YONHAP]


Hwang Hee-chan and Son Heung-min are set to face off for the first time in England as Wolverhampton Wanderers take on Tottenham Hotspur in the third round of the Carabao Cup on Wednesday, or Thursday morning in Korea.

Hwang joined Wolves on loan on Aug. 29 and made his first appearance for the club on Sept. 11, when he scored against Watford. To date, Hwang is the only Wolves player to have scored so far this season. He is expected to make his first start for the team against Tottenham.

Ahead of the Carabao Cup game, Hwang spoke to reporters about the move to Wolverhampton.

"It was an honor for me to score a goal on my debut, especially in the Premier League," Hwang was quoted as saying by Sky Sports. "It has been my dream to come here since I was little. I was very happy and I really appreciate the people who helped me to move here."

Hwang joins Wolves on loan for the entirety of the 2021-22 season, with the club reportedly maintaining the option to buy Hwang for £12 million.

"In Korea, I did not really need to defend, I could just attack and score goals so it was never a problem," Hwang told Sky Sports. "When I played on the European stage, initially that was my weakness, not doing the defending. Actually, that was the main reason why I did not play more at Salzburg at first. However, I overcame it and in the end, it has become my strength."

Known for his aggressive style of play, Hwang is often known as The Bull, a nickname Wolves' fans have been quick to embrace.

"I don't know where that name came from, it started just like that," Hwang told Sky Sports. "Maybe it is my playing style, I am aggressive and I try to break through any opponent who is defending me. I think that is what the fans expect. I want to show that for them in my performance."

As Hwang follows in Son's footsteps, the elder statesman of Korean football will also be looking to get back on his feet against Wolves on Wednesday. Son played 90 minutes in his first game back from injury on Sunday in a disappointing 3-0 loss to Chelsea.