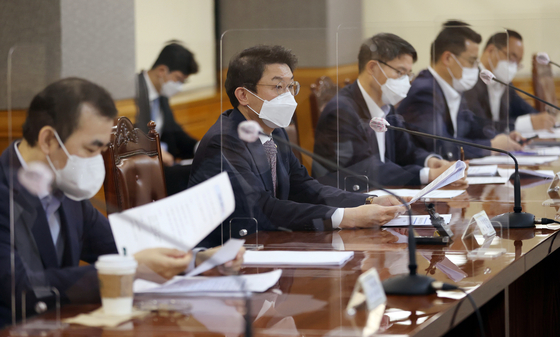 Stocks dropped as Chuseok came to an end, with investors rattled by trouble in China and worrying comments from the U.S. Federal Reserve.

The dip after the three-day national holiday was expected on news that Shenzhen’s Evergrande could default on its debt.

The real estate developer has roughly $300 billion of debt. That’s equivalent to 2 percent of China’s GDP.

The Korean government raised concerns about the impact the Chinese developer might have on the global markets and the possible effects on Korea.

“In the process of deleveraging as a result of global monetary policies normalizing, the possibility of uncertain factors such as China’s Hengda Real Estates Group [the main unit of Evergrande] emerging unexpectedly exists,” said Lee Eog-weon, vice finance minister, during a government meeting on macroeconomy and finance on Thursday.

The vice finance minister said on top of the Chinese developer’s situation, the U.S. Federal Reserve’s decision about tapering could increase the volatility of the financial market.

“The uncertainties regarding the timing of raising interest rates could significantly increase if the job recovery is slower than the U.S. Federal Reserve’s forecast or if inflation persists,” Lee said.

The Federal Reserve on Wednesday held the benchmark interest rate steady between 0.00 and 0.25 percent while continuing to purchase $120 billion of bonds a month.

However, Federal Reserve Chairman Jerome Powell hinted that changes could come during next meeting, in November.

The Korean vice minister said the government will closely monitor not only global inflation but also the economic recovery and decisions by major central banks and the U.S. Federal Reserve.

Market analysts say the possibility of another major global economic crisis is low.

“The 1998 Long-Term Capital Management (LTCM) crisis and the 2008 Lehman Brothers crisis were financial risk crises where credit and liquidity defaults, which started with massive leverage and derivative products, happened simultaneously,” said Park Seok-joong, Shinhan Investment senior analyst on global investment. “However, in the case of Evergrande, the financial institution’s loss exposure is predictable and limited. The possibility of spilling over to a credit or liquidity default and systematic risk is low.”

Some analysts say there is still a possibility of risk.

“During the holidays, volatility in the global market increased,” said Suh Sang-young, an analyst at Mirae Asset. “Concerns over Hengda Group have eased, and there are signs of markets rebounding.”

“But due to an increase in demand for dollars, the impact on the won-dollar exchange rate could have a negative impact on foreign investors.”