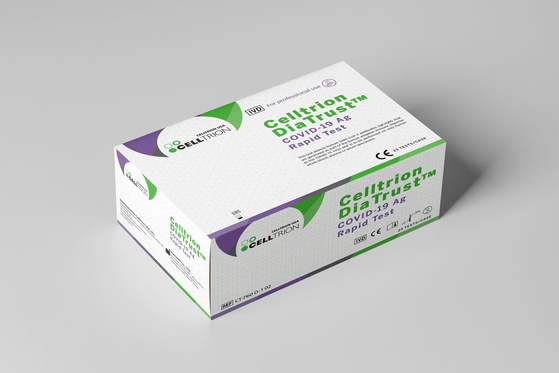 The DiaTrust Covid-19 test kit, which was codeveloped by Celltrion and Humasis [CELLTRION]


Celltrion said Thursday it will supply the U.S. government its Covid-19 diagnostic kits in a deal worth 738.2 billion won ($628 million).

Under the deal with the Defense Logistics Agency under the U.S. Department of Defense, Celltrion will supply the kits to some 25,000 locations in the United States, such as military bases, long-term care facilities and community testing sites, starting as early as Oct. 1.

The supply will run through Sept. 16, 2022, and deliveries will be made on a weekly basis. The value of the deal could be as much as 738.2 billion won, Celltrion said.

Distribution of DiaTrust test kits in the United States will be handled by Celltrion USA.

The DiaTrust Covid-19 Ag Rapid Test, which was jointly developed by Celltrion and Kosdaq-listed Humasis, is an antibody diagnostic test that produces results within 15 minutes. Two versions are offered: point-of-care tests (POCT), which can only be used in the presence of medical professionals, and Over-The-Counter tests that allow patients to test themselves at home. The POCT kit is being sold in the deal.

Celltrion said the deal is meaningful in that its “product quality, manufacturing and supply capabilities have been recognized by the U.S. Department of Defense.” The large-scale manufacturing capability of Humasis also helped Celltrion win the contract, the company said.

“The fact that Celltrion was selected as a supply company for U.S. Department of Defense, which is known to have strict criteria, proves that our technology and supply capabilities have been recognized globally,” said a spokesperson for Celltrion. “As the spread of Covid-19 variants have become a more serious issue around the globe, we will endeavor to raise the reliability of our test kit by concentrating on supplying the products upon the deal.”