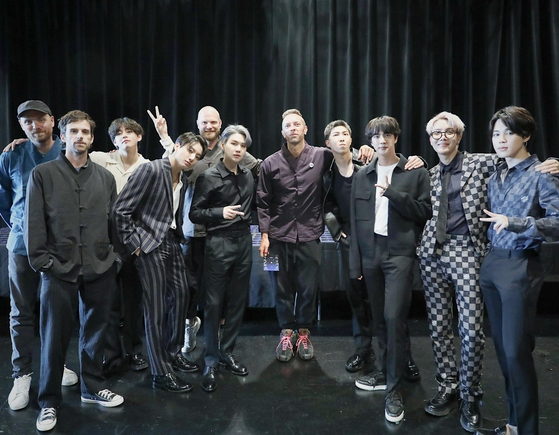 BTS and Coldplay met up in New York on Thursday, a day before the release of their single ″My Universe″ on Friday. [BTS TWITTER]


BTS, who is currently in New York after giving a speech at the Sustainable Development Goals Moment on Monday ahead of the U.N. General Assembly, uploaded a picture on its social media channels Thursday with the British rock band Coldplay.

In the photo, the septet and the four members of Coldplay are posing with their hands on each other’s shoulders. Chris Martin and Guy Berryman are seen wearing modern hanbok (traditional Korean attire), which is said to be a gift prepared by BTS.

Earlier this month, media outlets reported that BTS and Coldplay collaborated on a single titled “My Universe," which will be released worldwide on Friday 1 p.m.

Chris Martin visited Korea in April this year to collaborate with BTS at their agency HYBE.

According to Coldplay’s record label Parlophone, the single and the official lyric video of “My Universe” will be released Friday and the two bands will appear together in a documentary titled “Inside My Universe,” which will be released on YouTube Sunday.

BTS is in New York as special presidential envoys for future generations and culture at the United Nations headquarters, encouraging the youth of the world to be hopeful through the pandemic and look forward to the future. The band's special performance video of its latest hit English-language single “Permission To Dance" at the U.N. headquarters, was streamed more than 14 million times on the U.N.’s YouTube channel as of Thursday morning.