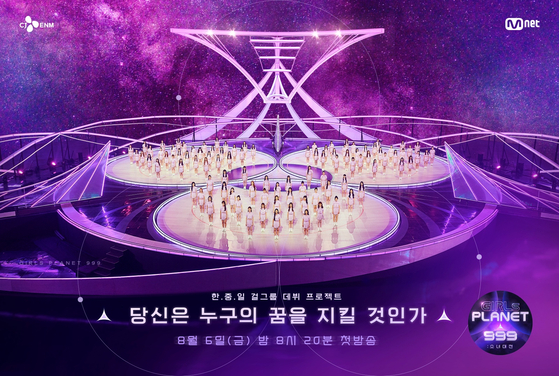 
Mnet’s multinational audition program “Girls Planet 999” was the cable channel's most ambitious project for the latter half of this year. The show aired its first episode in early August and has passed the middle point, but its ratings have never surpassed 0.86 percent; disappointing compared to Mnet’s previous audition show franchise “Produce,” whose four seasons all had ratings above 2 and up to 5.2 percent after the first few episodes.

The show initially gained attention due to the fact it featured 99 contestants from Korea, Japan and China — 33 hopefuls from each country. It was also compared to the “Produce” franchise’s third season “Produce 48” which was held in collaboration with Japanese entertainment firms, featured Japanese contestants and formed the popular multinational girl group IZ*ONE. “Girls Planet 999” was expected to be on an even larger scale than that as China joined the mix, but the results have turned out to be rather disappointing.

Nonetheless, the show has been successful in containing the political powder keg, which was deemed as the show’s greatest risk factor as it featured contestants from three nations whose relationships have been under strain in recent years. Both Mnet and viewers worried that the show could easily spiral into controversy considering Korea and Japan’s shared colonial history, Korea and China’s cultural feuds and the touchy relationship between Taiwan and China.

An image circulating on Korean online communities which shows Chinese and Taiwanese contestants who have previously referred to the Korean War as the “War to Resist America and Aid Korea." [SCREEN CAPTURE]


Especially after it was revealed that some Chinese and Taiwanese contestants have previously referred to the Korean War as the “War to Resist America and Aid Korea,” the Chinese term for the war which reflects China’s historical view that it helped North Korea in order to save the Korean Peninsula from U.S. imperialism, Koreans expressed disdain about the multinational mix.

Mnet thoroughly prepared preemptive measures to prevent more controversy. According to the channel, the show does not air any remarks about certain countries or images of national flags, nor any kind of “sensitive” words or symbolism. Each contestant is only marked as C, J or K depending on her nationality, putting minimal emphasis on the country. All statements or remarks referring to their individual countries are edited out.

This is in stark contrast with “Produce 48,” in which contestants often talked about cultural differences between Korea and Japan. 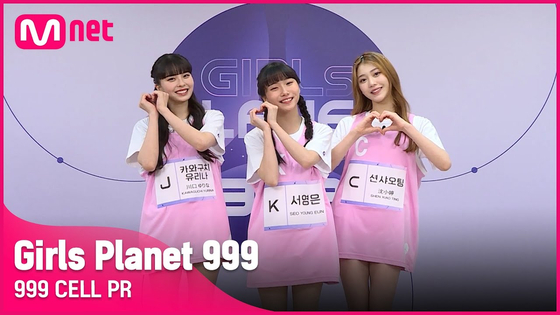 In "Girls Planet 999," each contestant is only marked as C, J or K depending on her nationality, putting minimal emphasis on the country. [CJ ENM]


The concern that China’s disproportionately large population of 1.4 billion may work in favor of the Chinese contestants was also quelled thanks to a system that Mnet designed, tying three contestants, one from each nation, together as a group dubbed a “cell.” The group shares a common fate and either passes or fails a round together.

During the seven episodes that have aired so far, the show has indeed not sparked any political controversy. Mnet’s endeavors to avoid controversy did work.

But the success of the show is a different story. Some say that Mnet’s meticulous measures to prevent nationality-related controversy caused a side effect of extremely low ratings.

“The ‘cell’ system gives little weight to Korean contestants since they are only one third of each cell,” said head researcher Kim Jin-woo of Korea’s album sales tracker Gaon Chart. “As a result, a lot of talented Korean hopefuls have failed out of the show. That has led Korean viewers to feel animosity and domestic ratings to decline.”

The first vote results were announced on Sept. 10 in the sixth episode, and Japanese contestant Yurina Kawaguchi ranked No. 1. Three of the top nine contestants were Korean and the highest ranking Korean hopeful was at No. 4. Although there is no rule that the top ranking members must be Korean, many domestic viewers found it unrelatable that the likely winners of a Korean audition program to form a K-pop girl group were mostly not Korean, and stopped tuning in. 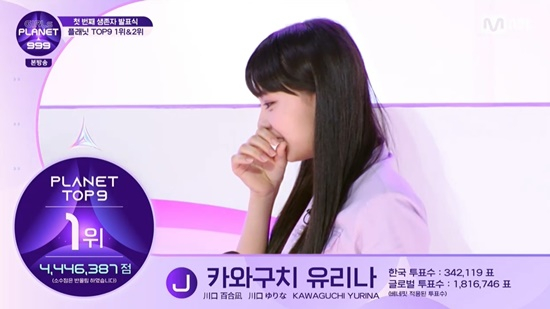 The first vote results were announced on Sept. 10 in the sixth episode, and Japanese contestant Yurina Kawaguchi ranked No. 1. [CJ ENM]


“Even if Mnet had to eliminate touchy subjects, it should have added in some interesting factors to spice things up,” an anonymous television producer said. “‘Girls Planet 999’ has none of that, so it decreases the fun.”

Some viewers also point out that the format has barely changed from “Produce” although the production staff openly declared that it will “not be the fifth season of 'Produce.'”

“There’s not enough differences from ‘Produce’ for ‘Girls Planet 999’ to escape the shadow of the former,” said pop culture critic Jeong Deok-hyun.

However, Jeong added that despite low ratings and negative reviews, Mnet will still get the last laugh.

“Mnet probably didn’t expect the show to flop to this extent, but the show wasn’t intended for the domestic market in the first place,” he said.

“The fact that Mnet made a global fan platform named ‘Universe’ for the show means that it’s aiming for the international fandom. Once they secure a fandom, the show may fail but good business is still possible." 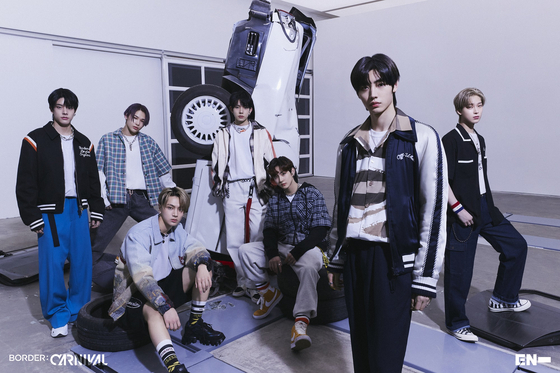 
“Mnet’s 2020 audition program ‘I-Land’ also flopped in terms of domestic ratings, but formed the boy band Enhypen which is seeing great success,” added Kim. “We should also consider that television represents old media. Nowadays, ratings are diffused due to viewers on other platforms like YouTube. Ratings and popularity do not always align.”

YouTube videos related to “Girls Planet 999” surpassed 233 million views as of early September, and 1.4 billion views on short-video sharing platform TikTok. The show gathered over 39 million votes around the world for its first vote via Mnet’s own platform Universe.

Still, experts agree that the girl group formed by the show will face many more challenges than other K-pop acts produced via auditions.

“The Chinese contestants who are currently ranking high are still not viewed favorably by Koreans,” Kim said. “Also, China’s recent extensive regulations on fandoms and the consequential strain on its music market is also an unexpected difficulty that Mnet will have to face."