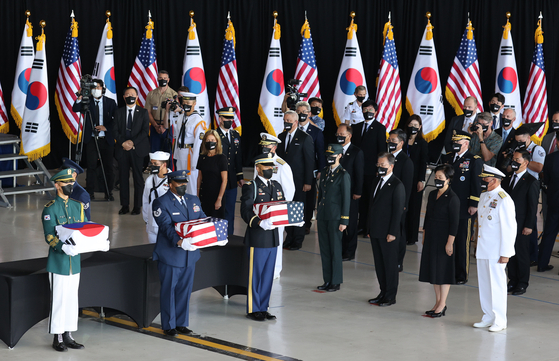 President Moon Jae-in, third from the right in the front row, First Lady Kim Jung-sook and John Aquilino, chief of the U.S. Indo-Pacific Command, take part in a joint repatriation ceremony returning the remains of 68 South Korean soldiers killed in the 1950-53 Korean War from the United States at Hickam Air Force Base in Hawaii Wednesday. Korea returned the remains of six U.S. soldiers. [YONHAP]


President Moon Jae-in received the remains of 68 South Korean soldiers killed in the 1950-53 Korean War from the United States in a handover ceremony in Hawaii Wednesday.

South Korea handed over the remains of six American soldiers in a joint repatriation ceremony at the Hickam Air Force Base in Honolulu organized by the U.S. Defense POW/MIA Accounting Agency (DPAA) and the Korean Defense Ministry's Agency for Killed In Action (KIA) Recovery and Identification.

Moon is the first Korean president to hold a ceremony to transfer the remains of soldiers abroad, said the Blue House Wednesday.

The remains of two of the Korean soldiers have been identified as privates first class Kim Seok-joo and Jung Hwan-jo. They served in the U.S. Seventh Division's 32nd Infantry Regiment under the Korean Augmentation to the United States Army (Katusa) Soldier Program during the war and were killed in the Battle of Chosin Reservoir in late 1950.

Their remains were discovered by North Korea and sent to Hawaii with those of U.S. soldiers and had been identified on Sept. 2.

Of the six sets of remains of American soldiers, one included remains of a serviceman whose remains had already been transferred to the United States in 2018.

"Today, we pay tribute to all Korean War veterans, their families, as they fought in battle to protect and defend our values in the region," said Adm. John C. Aquilino, commander of the U.S. Indo-Pacific Command. "We will never forget their service and sacrifice as it paved the way for our strong network of alliances and partnerships that continues to secure a free and open Indo-Pacific."

He continued, "The Korean War brought our two nations side by side to fight for and defend the values embodied in the ideals of freedom. Twenty-two other nations contributed to the United Nations Command offering support, troops and medical assistance to restore international peace and security in the region. Many of those nations to this day continue to support peace on the peninsula through ongoing contributions to the United Nations Command.

"For more than six decades, the ironclad alliance between the Republic of Korea and the United States based on the bonds of mutual trust, shared values people to people talks and enduring friendship has delivered peace stability and prosperity in the Indo-Pacific."

Moon paid tribute to the Korean and American service members whom he said "made the ultimate sacrifice for freedom and peace of the Republic of Korea (ROK)."

In his speech at the repatriation ceremony, he again urged a formal declaration to end the Korean War, echoing his address to the United Nations General Assembly Tuesday.

"What our heroes wanted to see on the Korean Peninsula was a complete peace," said Moon in his speech. "At the UN General Assembly, I proposed that the relevant parties gather together and proclaim an end to the Korean War, creating a new chapter of reconciliation and cooperation. Sustainable peace is what the world hoped to achieve through the foundation of the United Nations. An end-of-war declaration will give new hope and courage for everyone around the world aspiring for peace beyond the Korean Peninsula."

The Korean War ended with an armistice agreement signed by the U.S.-led UN Command, North Korea and China on July 27, 1953, rather than a peace treaty.

Moon added, "The ROK-U.S. alliance forged in blood and the dedication of the war veterans has transformed into a comprehensive alliance that shares a whole range of values across political, economic, social and cultural realms, freedom and peace, democracy and human rights and the rule of law. Our two countries' unwavering endeavors to achieve complete denuclearization and permanent peace on the Korean Peninsula will never stop."

He pledged that the South Korean government will work toward the repatriation of all fallen heroes yet to be reunited with their families, including those who may be buried in the demilitarized zone at the inter-Korean border.

Moon added that humanitarian cooperation among the two Koreas and the United States for the recovery of remains "will help heal the wounds of war and build a strong foundation for reconciliation and cooperation."

The remains of the identified soldiers, Pfcs. Kim and Jung, were transported to Korea in caskets wrapped in the Korean national flag on Moon's Air Force One in a show of highest honor. Their repatriation comes after 70 years.

The 66 unidentified sets of remains were transferred on a KC-330 Cygnus multi-role tanker transport aircraft accompanied by Defense Minister Suh.

After arriving at Seoul Air Base, the remains of Kim and Jung will be returned to their family members, and the other 66 will be sent to an identification facility.

South Korea and the United States have been identifying and repatriating soldiers as part of the Korean War Identification Project (KWIP).

Since 2012, 307 remains of South Korean soldiers have been repatriated, including the 68 remains returned Wednesday, and 16 have been identified. Over the same period, the remains of 25 American soldiers were returned to the United States.

Last year the remains of 147 South Korean soldiers were repatriated from Hawaii in June 2020, the largest handover ceremony to date, as the two countries marked the 70th anniversary of the outbreak of the Korean War. The DPAA's identification lab is based in Hawaii.

After the ceremony, Moon held separate talks with Aquilino at the base and said, "The diplomacy and dialogue necessary for complete denuclearization and permanent peace on the Korean Peninsula must be supported by strong security," stressing that the U.S. Indo-Pacific Command "plays an important role in such efforts." 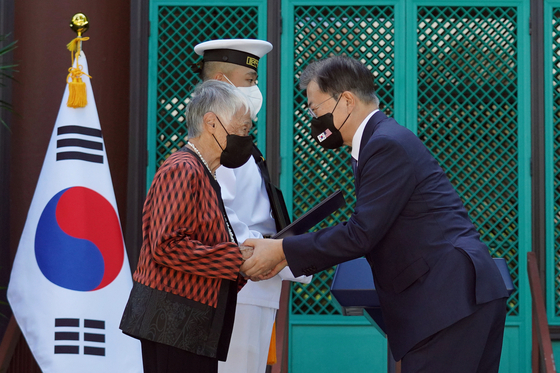 President Moon Jae-in, right, presents posthumously an Order of Merit for National Foundation to the late Kim No-di for her contributions to the Korean independence movement against Japan, accepted by her descendent at a ceremony held at the Korean Language Flagship Center at the University of Hawaii at Manoa Wednesday. [YONHAP]

Earlier Wednesday, Moon posthumously awarded medals of honor to two Korean immigrants in Hawaii, recognizing their contributions from the United States to independence activities during Japan's 1910-45 colonial rule of Korea.

Moon awarded the Order of Merit for National Foundation, the highest honor, to the late Kim No-di and Ahn Chung-song for their role in raising funds for independence fighters while residing in Hawaii, said the Blue House.

The award ceremony, the first to be held abroad, took place at the Korean Language Flagship Center at the University of Hawaii at Manoa and was attended by their descendants.

Kim, as a student at Oberlin College, attended the first congress of Korean-American representatives in Philadelphia in 1919, exposing violations of women's rights under Japanese colonial rule and championing gender equality. She continued her activities traveling across the United States to spread awareness of Korea's fight for independence from Japan and raised money to fund the movement.

Ahn likewise provided financial support to Korea's independence movement as an executive of the Korean Women's Association and is recognized for contributions to the community as a member of the United Korean Committee in America after liberation. She was the wife of another independence activist based on the island, Ahn Won-kiu, a president of the Korean National Association in Hawaii who also posthumously received the Order of Merit of National Foundation from the Korean government in 1995.

The president also visited the National Memorial Cemetery of the Pacific in Honolulu and paid tribute to war dead, including those who were killed in the Korean War.

Moon concluded Thursday a five-day trip to the United States that kicked off Sunday and took him to New York for the UN General Assembly along with Korean boy band and special presidential envoys BTS.

In his address to the 76th session of the General Assembly Tuesday, Moon proposed that the two Koreas, the United States, and possibly China, formally proclaim an end to the Korean War to "make irreversible progress in denuclearization and usher in an era of complete peace."

The Pentagon indicated that it is open to discussing an end-of-war declaration when asked about Moon's UN address.

John Kirby, spokesman of the U.S. Department of Defense, said in a press briefing Wednesday, "We continue to seek engagement with the DPRK to address a variety of issues, and we are open to discussing the possibility of an end-of-war declaration," referring to the acronym for the North's official name, the Democratic People's Republic of Korea.

The United States, he said, "remains committed to achieving lasting peace on the Korean Peninsula through dialogue and diplomacy with North Korea," adding that its goal "remains as always the complete denuclearization of the peninsula."

In a post on Facebook after wrapping up his visit to Honolulu Thursday, Moon wrote: "We are on our way home with 68 heroes."

He pointed to South Korea's elevated status at the United Nations and efforts to "contribute to the international community exemplifying solidarity and cooperation."