South hopes to bring North to talks with sanctions relief

South hopes to bring North to talks with sanctions relief 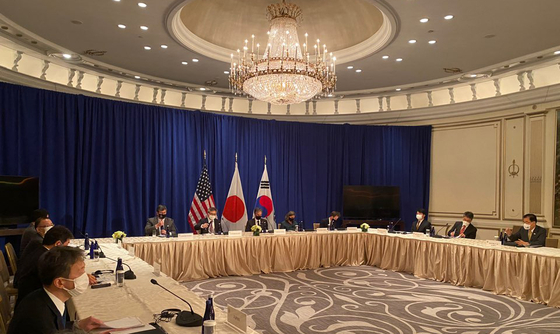 The foreign ministers of Korea, the United States and Japan meet in New York on Wednesday to discuss trilateral cooperation on regional security including denuclearization of North Korea and other issues including climate change and supply chains. U.S. Secretary of State Antony Blinken and his delegation are seated at the center, with the Korean delegation led by Foreign Minister Chung Eui-yong and the Japanese delegation led by Foreign Minister Toshimitsu Motegi seated opposite from each other. [YONHAP]


Korea’s foreign minister during a visit to the United States mentioned North Korea may be offered its desired sanctions relief in return for talks.

Following President Moon Jae-in’s call for a formal ending of the Korean War (1950-53) at the United Nations General Assembly meeting in New York on Tuesday, Foreign Minister Chung Eui-yong called for sanctions relief on the North during his meeting with the Washington-based think tank Council on Foreign Relations (CFR) on Wednesday.

In his conversation with Fareed Zakaria, a CNN host and board member of CFR, Chung reportedly commented on offering incentives to the North to draw the country out of isolation and onto the table for dialogue, mentioning that one of these incentives can be sanctions relief.

While Chung acknowledged that the U.S. government is not keen on rewarding Pyongyang with sanctions relief, he added that the option could be considered given that Pyongyang hasn't fired intercontinental ballistic missiles (ICBMs) for the past four years.

North Korean leader Kim Jong-un reportedly asked former U.S. President Donald Trump for full sanctions relief during their summit in Hanoi, Vietnam, in 2019, which fell through without an agreement.

The Joe Biden administration has emphasized over several occasions that it is open to dialogue with Pyongyang, but that it will not resort to the Trump government’s “grand bargain” approach in dealing with the regime. Biden earlier this year extended for another year the U.S. sanctions on North Korea, which have been renewed annually since 2008.

Ruling Democratic Party (DP) Chairman Song Young-gil, who also joined Chung and President Moon on the trip to the United States, spoke in unison about offering incentives to the North.

“The North has not tested its nuclear weapons or fired a long-range [ICBM] missile in the past four years. […] We have to start thinking of incentives to reward and engage the North, and the restoration of the Kaesong Industrial Complex can be an option.”


The Kaesong Industrial Complex, an inter-Korean industrial park in North Korea, was shut down 2016 during the former South Korean administration led by Park Geun-hye.

When asked about the recent statements from the Korean officials, the U.S. State Department maintained its position that it is open to dialogue with Pyongyang without conditions.

“We have no hostile intent toward the DPRK, and we are prepared to meet without preconditions,” a Department of State spokesperson told the JoongAng Ilbo on Wednesday, using the acronym for North Korea's official name, the Democratic People's Republic of Korea. “We hope the DPRK will respond positively to our outreach.”

The spokesperson added that Washington is also ready to engage with Seoul and Pyongyang for “lasting peace on the Korean Peninsula.”

“We‘re open to discussing the possibility of an end of war declaration,” said John Kirby, Pentagon press secretary, in a briefing on Wednesday. “Our goal remains, as always, the complete denuclearization of the of the peninsula.”

Foreign Minister Chung told the press after his meeting with U.S. Secretary of State Antony Blinken and Japanese Foreign Minister Toshimitsu Motegi in New York on Wednesday that the end-of-war declaration, as well as denuclearization of North Korea, was part of their discussions.