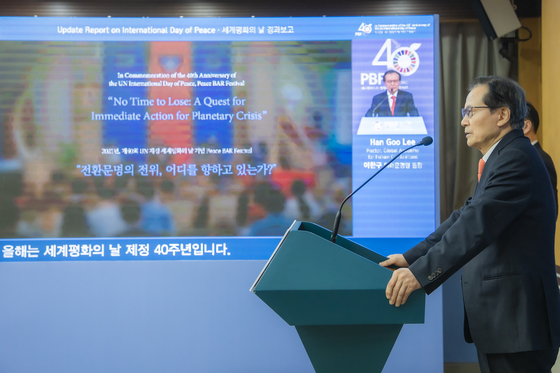 
The first dialogue session of Kyung Hee University’s Peace BAR Festival kicked off last Friday under the theme of “The Crisis of Civilization on Earth and a Revolution of Consciousness.”

Dr. Ervin Laszlo, founder and president of the Club of Budapest, along with Shin Chung-shig, professor at Kyung Hee University Humanitas College, addressed the urgency of "mindset or consciousness shifts" as a prerequisite for successfully tackling the crisis of modern civilization and setting a new course of evolution for the future.

Laszlo addressed that the Earth's crisis is threatening the entire human civilization, and that the fundamental cause of this crisis is a catastrophic bifurcation that is approaching a critical level.

“The worst thing that could happen, I think, in a situation of the danger of crisis is not to change, not to believe in the necessity and the possibility of change,” he said.

Laszlo said the ongoing Covid-19 pandemic and climate crisis can turn into a historic opportunity.

“What we're having today is an extremely global level of strong disruption,” Laszlo said. “It has been catalyzed by the Covid-19 virus, and, in that sense, we can be grateful that this disruption has occurred.”

He continued, “We have to have unity integration on all levels, and we need to shake up that bifurcation […] before the system could move toward the unsustainability level of irreversibility."

Dr. Shin, on the other hand, pointed out that “In order to turn a severe crisis into an opportunity, the key seems to be in how the change is made.”

“I believe that the perceptions and practices of global political leaders and entrepreneurs are of decisive importance,” Shin said, questioning what Laszlo would like to suggest to these political and entrepreneur leaders.

In response, Shin said, “Entrepreneurs and political leaders need to wake up" and "civic society needs to be changed.”

Shin mentioned the terminology “spontaneous collectivism” from Laszlo’s book "Individualism, Collectivism, and Political Power" (1963), in which the Hungarian science philosopher stressed that we need to strengthen and empower culture, explore our own selves and explore religious and experimental things.

“Socrates mentioned ‘know thyself,'” Shin said, adding, “Expanding on that idea, how can we know ourselves among the interconnected, rapidly changing world? […] How could you connect these leaders and civil society?”

“As you mentioned, we have to get the leaders [to work on the basis of a new paradigm],” Laszlo answered. “Not separateness, not exaggerated individuality, not exaggerated collectivism, but to find a systemic approach, where all people and all systems are both part and whole.”

Laszlo stressed that there has to be a change in consciousness, and that he believes the change is already emerging among young people.

“Young people are coming together to understand that peace is the optimal, peace is the supreme goal, love is the element that we need to live on this planet,” he said. “If they can do that, then there is hope that there will be a [positive] change.”

At last, Shin asked what kind of message or advice Laszlo would like to deliver to the future generations in this time of crisis.

“Not accepting doctrines that have been created by others as simply an authority that you have to memorize and perhaps you have to obey,” Laszlo said, “but to accept your inner authority, your being of your own self, who you are.”

He continued, “Understand that you are part of a miraculous, wonderful universe that works towards a higher level of integration and harmony, and pursue that.

"If you can achieve that, you will create young people who become adults for a positive factor of life, who will be peaceful, who will be productive, who will not destroy the world around them. […] That, I think, is my advice, my hope for Kyung Hee University and for all universities worldwide.”