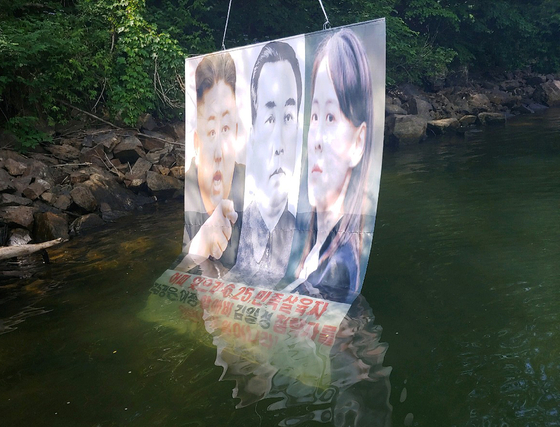 An anti-Pyongyang poster made by a defectors' group in South Korea found in a stream near Hongcheon County, Gangwon, on June 23, 2020. [YONHAP]


The Foreign Ministry’s budget for human rights protection in North Korea was reduced this year to a third of what it was three years ago.

According to the ministry’s records demanded by People Power Party Rep. Thae Yong-ho, obtained exclusively by the JoongAng Ilbo on Thursday, the ministry’ budget for the protection of human rights in North Korea was reduced from 49 million won ($42,000) in 2018 to 15 million won in 2021.

Rep. Thae is one of two North Korean defector-turned-lawmakers in the main opposition party.

This budget is set by the Foreign Ministry annually for its activities that promote human rights protection in the North, including hosting consultations on the topic with other governments including the U.S. government.

The budget for this year was set last December and took effect with the start of the new year.

The ministry said the budget was reduced mainly due to the Covid-19 pandemic and a fall in the number of multilateral consultations on North Korean human rights.

“The government's efforts to promote human rights in North Korea are being carried out in various programs in other relevant ministries, and cannot be evaluated with a specific budget amount,” a Foreign Ministry official told the JoongAng Ilbo.

But for some critics, the reduction goes hand-in-hand with the argument that the Moon Jae-in administration has been turning a blind eye to the human rights situation in the North.

The administration, in March, had declined to support the resolution at the United Nations Human Rights Council denouncing the human rights violations in North Korea, for the third consecutive year.

And this year is the fifth consecutive year of the ministry failing to appoint an ambassador for the North Korean human rights issue. The position was held by Lee Jung-hoon from 2016 to 2017, for the first and last time.

The joint Korea-U.S. committee meetings on North Korean human rights, which were held regularly since it was launched in October 2016, has all but disappeared since the onset of the Moon administration in 2017.

Seoul’s anti-leaflet law, which bans the sending of anti-Pyongyang propaganda materials across the inter-Korean border, was passed last December. The United Nations was among other international groups that voiced concerns that the law may violate freedom of expression.

While the Ministry of Unification is the main body of the Korean government overseeing North Korean defector issues, the Foreign Ministry also has a separate fund to help defectors settle down in the South. Funding for this has also been reduced in recent years — from 4.1 billion won in 2017 to 2 billion won in 2021, according to the ministry records obtained by Rep. Thae’s office.

The ministry said that the reduction was mainly due to the removal of some defectors programs at the ministry last year.

“We moved some 1.9 billion won worth of programs on defectors from the Foreign Ministry to the Ministry of the Interior and Safety last year,” said a ministry official.