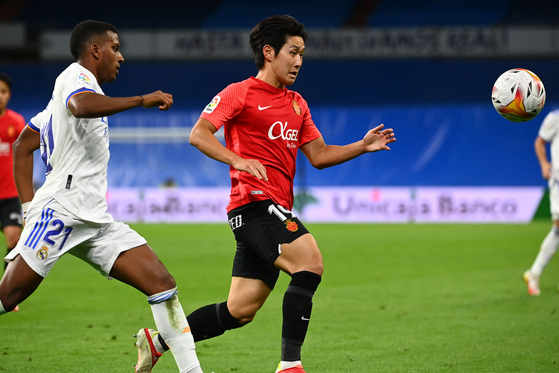 
Lee Kang-in scored his debut goal for Real Mallorca in spectacular fashion on Wednesday, slotting home a beautiful curling shot that was the only bright spot in a tough 6-1 loss to Real Madrid.

Heading to Madrid to face La Liga's top club was always going to be a difficult fixture for No. 10 Mallorca, who have two wins, two draws and two losses so far this season. Real Madrid, unbeaten so far, were unlikely to be seriously concerned by the visit from the much smaller team.

It took just three minutes for Madrid to show exactly why they're No. 1 with a goal from Karim Benzema. Marco Asensio followed with a hat-trick, finding the back of the net in the 24th, 29th and 55th minutes. Benzema added another in the 78th minute and Isco rounded things off with goal number six in the 84th minute.

In the midst of that onslaught, Lee offered Mallorca the king of consolation goals in the 25th minute, outclassing Real Madrid in spectacular fashion and allowing his teammates to leave Santiago Bernabéu without being completely crushed.

Picking up the ball in the midfield, Lee weaved through the Madrid defense, passing Éder Militão and David Alaba, before curving a shot across the box and into the back of the net. 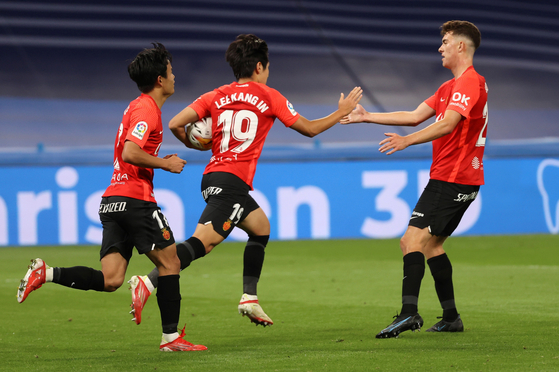 Mallorca's Lee Kang-in celebrates with teammates after scoring a goal during a La Liga match between Real Madrid and Real Mallorca at Santiago Bernabeu stadium in Madrid on Wednesday. [EPA/YONHAP]


Celebrations were cut short minutes later when Asensio scored his second, but Lee's brief moment of brilliance was enough to avoid the shutout. For Lee himself, a stunning debut goal against one of the most famous teams in the world is not a bad way to start a club career.

Lee joined Mallorca on a four-year deal on Aug. 30 after Valencia terminated his contract, ending a decade-long career at the club that started when he joined the academy at just 10 years old.

Valencia's decision to drop Lee has less to do with his performance at the club and more to do with league rules. Under La Liga rules, clubs are only allowed to have five players that are citizens of countries outside the European Union on their books, and only three on each matchday squad.

Lee had long held one of those non-EU spots, alongside Uruguayan striker Maxi Gomez and Paraguayan defender Omar Alderete. In Ausut, the club signed Brazilian forward Marcos André, leaving four men competing for the three matchday spots. As Gomez is a regular starter and Alderete is on loan to the club, that left Lee as the odd man out.

Lee joined Valencia in 2011 and made the move up to the A team in 2018. Last season, Lee made 27 appearances for the club, many of them from the bench, but scored only one goal. But his failure to establish himself at the club is seen more as a case of untapped potential than a lack of skill.

Spanish press were quick to rally against Valencia for the way that Lee's career at the club came to an end. After 10 years as one of the team's biggest prospects, Lee's unceremonious departure was seen as an indictment of the team's management and its failure to develop new talent.

But Valencia's loss is Mallorca's gain, and Lee's goal against Madrid will undoubtedly have helped to establish him as a real offensive force at the club.

Mallorca may not be a big name club like Valencia, but they are a La Liga team. The club has struggled over the last few years, but it has a strong footballing pedigree and continues to play alongside some of the biggest clubs in the world. For a rising star like Lee, who is still only 20, Mallorca could be a space to grow and develop as a first team player.