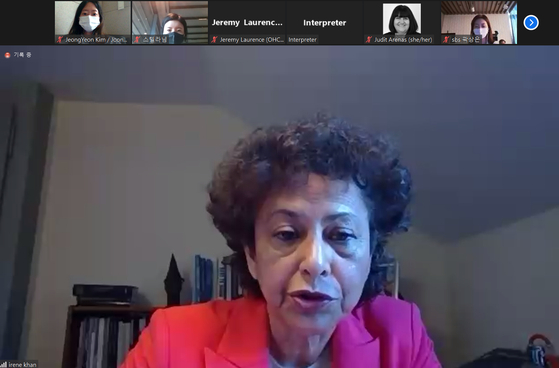 
Irene Khan, the UN special rapporteur on freedom of opinion and expression, warned that Korea’s controversial media bill, if passed, will not only be “seriously detrimental” for freedom of press in the country, but also impact its international standing.

Khan in a virtual press conference Friday afternoon called on the Korean government and National Assembly to reconsider an amendment to the Press Arbitration Act, expressing concerns that it “could have very serious repercussions on freedom of expression, media freedom and consequently on open democratic debate in Korea.”

Korea has played a “leading role” as a member of the United Nation’s group of friends for the protection of journalists, she noted.

“I am afraid if this amendment is adopted with this kind of disproportionate punishment on media, it will send a negative message to others around the world who are looking to Korea as a role model in the context of media freedom,” said Khan. “So I would urge the Korean parliament to keep in mind not only the domestic impact of this legislation but the international impact and continue to be a leader on supporting media freedom.”

The draconian media arbitration bill pushed by the ruling Democratic Party would impose a harsh five-fold increase in penalties on media outlets that release false or fraudulent news reports.

Civic groups have also taken issue with the vague definition of false or fraudulent news reports, which could lead to abuse of the law. The bill defines false or manipulated report as “the act of reporting or mediating false information or information manipulated to be misconstrued as facts.”

Khan in a letter on Aug. 27 sent through the Office of the High Commissioner for Human Rights (OHCHR) expressed concern over the bill’s potential to infringe on freedoms of information and expression and called for the bill to be revised to comply with international human rights conventions.

The Korean government sent a response letter to the OHCHR, explaining that the country has worked hard for freedom of expression and the National Assembly is discussing a revision to the media bill. A parliamentary consultative group was formed to facilitate such discussions.

The introduction of the bill has been delayed to a Sept. 27 National Assembly plenary session after parties could not reach agreement on the bill at the end of last month.

“I understand informally that there is discussion of reducing it [from] five times to three times the normal damages,” said Khan. “This is still disproportionately high and will have a chilling effect on media.”

She added that broadcasters and newspapers “will be afraid to print news” because of such heavy punitive measures."

Khan said she is not sure of the necessity of such a press bill specifically targeting the media.

“This amendment seems unnecessary when you consider the importance of media freedom,” said Khan. “Media freedom is an essential pillar of democratic society. That is why under international law, freedom of expression is given this prominence.”

Khan urged the Korean government to respect the International Covenant on Civil and Political Rights (ICCPR), which stipulates the need to respect and protect the right to freedom of opinion and expression.

Khan pointed out that a shallow revision to the amendment by lawmakers will not be sufficient to overcome its flaws and could provide problems “that will affect Korea’s obligations under international law.”

This includes removal of the disproportionate damages clause and coming up with a “narrow definition of defamation.”

She said that such a law “should clearly link the information to one of the grounds for which international law allows restrictions to freedom of expression,” such as a clear protection of rights or reputation, public security or public order.

If the National Assembly passes the law, Khan noted that Korea could expect further outcry from the international community.

She continued, “As part of the UN human rights system, my role will be to continue to monitor the situation in Korea to see what impact this amendment if it is adopted, and report on that impact. We will not forget about this and let it go.”

President Moon Jae-in discussed the amendment while on Air Force One en route to Korea from the United States on Thursday.

“The media, civic groups, and the international community are raising various issues regarding the amendment to the Press Arbitration Act," Moon said, "so I think those points need to be thoroughly reviewed.”