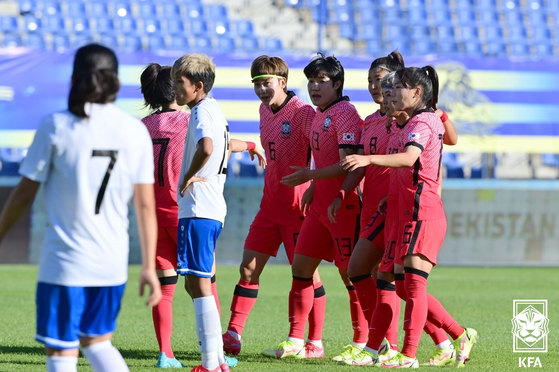 Korean national team players celebrate after beating Uzbekistan 4-0 in a qualifier for the 2022 Women's Asian Cup in Tashkent, Uzbekistan on Thursday. [YONHAP]


The Korean women's football team secured their spot in the 2022 Women's Asian Cup on Thursday evening, beating Uzbekistan 4-0 in the second of two qualifiers in Tashkent, Uzbekistan.

Korea got off the mark quickly, with captain Ji So-yun's 17th minute free kick deflected into the net by Uzbek defender Nozima Kamoltoeva. Chelsea star Ji, who became the highest scoring Korean footballer ever during last week's qualifier against Mongolia, was unable to add to her 59 goals for the national team during Thursday's match.

Kamoltoeva's deflection was it for the first 45 minutes, with the score at 1-0 when the whistle blew.

Korea piled on after the break. Choe Yu-ri scored the second goal in the 51st minute, before Moon Mi-ra came on as a substitute to hammer home a brace in the last six minutes of the game. 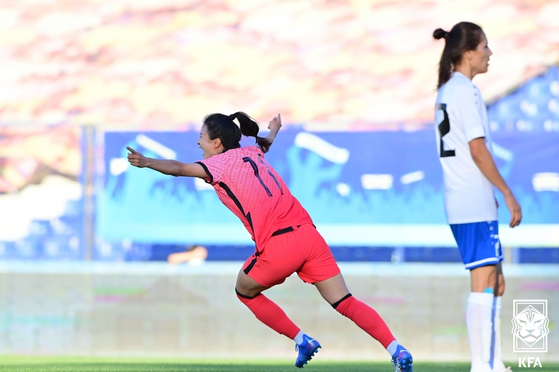 Choe Yu-ri celebrates after scoring a goal against Uzbekistan in a qualifier for the 2022 Women's Asian Cup in Tashkent, Uzbekistan on Thursday. [YONHAP]


Moon, who plays as a midfielder for Suwon UDC, has set herself apart in this tournament, scoring five goals in two games, both after coming on as a substitute. Four of those five goals were scored after the 80th minute, positioning Moon as a phenomenally clutch offensive powerhouse. She is the second-highest scorer of the entire tournament so far, behind Pham Hai Yen of Vietnam with six goals.

Korea topped Group E after beating Mongolia 12-0 and Uzbekistan 4-0. Uzbekistan also managed a 12-0 win over Mongolia, but slipped against Korea. Only the winner of each group advances to the tournament.

The 2022 AFC Women's Asian Cup will be played from Jan. 20 to Feb. 6 next year. The top five teams excluding Australia from the Asian Cup will earn a spot in the 2023 FIFA Women's World Cup. Australia automatically qualifies as one of the host nations, alongside New Zealand.