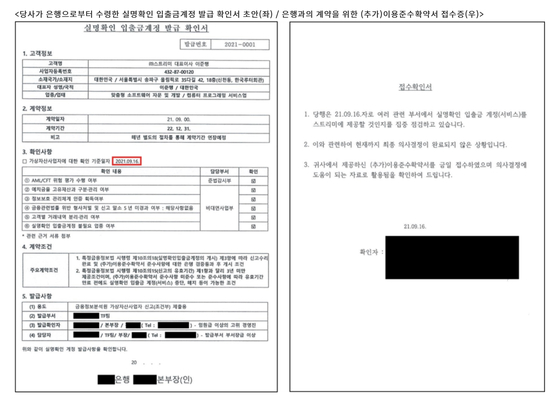 A screen capture of an early draft of a confirmation document a bank gave cryptocurrency exchange Gopax. According to the exchange Friday, it believed a partnership would be inked as it received a sample of this confirmation document, however, the bank delivered its final rejection to the exchange Friday. As a result, Gopax abruptly closed its won-based trading market. [SCREEN CAPTURE]


Oligopoly became a reality in the cryptocurrency trading market with only four exchanges, Upbit, Bithumb, Coinone and Korbit, inking partnerships with banks by the Sept. 24 deadline.

Gopax, a smaller exchange working to sign a deal with a regional bank, announced Friday the bank ultimately declined.

Crypto exchanges were required to sign agreements with banks for the issuing of accounts in the names of actual traders of cryptocurrency to continue won-based trading, as required by an amendment to the Act on Reporting and Using Specified Financial Transaction Information.

So far, Upbit has an agreement with internet-only K bank, Bithumb and Coinone are with NongHyup Bank and Korbit with Shinhan Bank.

Huobi Korea and Gdac had said in notices that they are very close to inking deals with banks, however none met the deadline.

Gopax did not announce it will close its won-based trading service a week ago like other exchanges. Instead, it posted a notice saying it "expects won trading market to operate normally," as it thought it would be possible to register as an exchange without discontinuing some of its services on Sept. 17.

As it was mandated for exchanges to give a week's notice for discontinuing services, Gopax uploaded a detailed post on Friday with a special apology to investors. It showed samples of an early draft of a confirmation document it received from a bank that it was in talks with to explain why it thought the deal would actually work out.

As the bank pulled out Friday, Gopax ended won trading as of 4 p.m. Friday, after posting a notice of its closure at noon.


With the four exchanges now dominating the local cryptocurrency trading market, some are voicing concerns about the lack of competition in the market.

According to data provided by Rep. Noh Woong-rae of the ruling Democratic Party of Korea earlier this month, the four exchanges had 97.45 percent of the local cryptocurrency trading market as of Sept. 6. Upbit alone accounts for 88.25 percent of the market.

In a Sept. 7 statement, Rep. Noh stressed the need for healthy competition.
"In an oligopolistic market, exchanges can list or delist coins as they like or raise trading fees," Noh said.

While it is possible for other exchanges to resume won-based trading by inking agreements with banks later, it is not very likely.

Banks have been reluctant to deal with exchanges as they don't want to take the blame for potential problems at exchanges and have been asking the FSC to absolve them of liability, but the request was rejected.