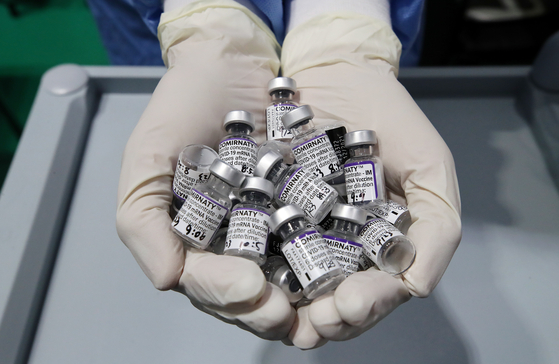 
It's been a banner year for Korean biopharmaceutical companies as more have been winning big licensing deals to transfer technologies to global players.

They have won a total of 18 licensing deals as of Sept. 18, according to Korea Pharmaceutical and Bio-Pharma Manufactures Association. Of them, two were deals worth over 1 trillion won ($851 million).

The total value is likely to exceed 10 trillion won.

It was the third time that a Korean company won a deal worth over 2 trillion won after Hanmi Pharmaceutical in 2015 and Daejeon-based Alteogen in 2020.

The licensing business is considered to be a “win-win” strategy for both small bio companies and bigger firms. Small companies that own the crucial technology don’t have the experience or capacity to develop bio pharmaceuticals, and big firms do not have to spend time to develop the technology and are able to release new drugs more quickly.

In February, Genexine signed a 1.2 trillion won deal with Indonesia bio company KGbio for a technology transfer of GX-17, which is being developed as a Covid-19 treatment.

In the deal, KGbio acquired rights to commercialize the drug in various places, including Southeast Asian countries, Middle East, Africa, Australia, New Zealand and India. Genexine will also receive 10 percent royalties based on the revenue of the drug in those countries. 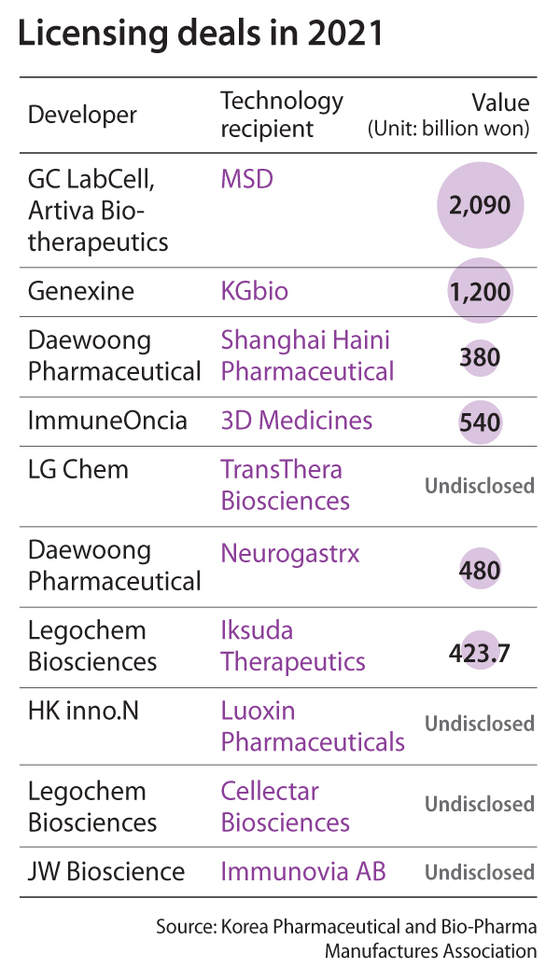 
Daewoong Pharmaceutical in March won a licensing deal with Shanghai Haini Pharmaceutical for technology transfer of reflux disease treatment candidate Fexuprazan. The Shanghai-based bio company acquired the rights to develop the drug and commercialize it in China. The deal is worth about 380 billion won, with a 6.8 billion won upfront payment.

About three months later, Daewoong signed a deal potentially worth 480 billion won with Woburn, Massachusetts-based Neurogastrx to license Fexuprazan. Neurogastrx acquired the rights to develop and commercialize the treatment in the United States and Canada.

In March, ImmuneOncia, a joint venture between Yuhan and San Diego’s Sorrento Therapeutics, signed a deal with Shanghai’s 3D Medicines for the technology transfer of IMC-OO2, its monoclonal antibody designed to block CD47. The deal is worth some 540 billion won.

“The major feature of this year’s bio industry is that Korean companies and bio ventures have been sweeping all big licensing deals,” said Lee Seung-kyu, vice chair of KoreaBIO. “The number of technology transfer deals has been on the rise as domestic bio companies have been acquiring know-how on winning the deals while more global companies seek for deals to license-in technology.”

The open innovation system is another favored strategy for bio companies. Open innovation refers to a company that buys technology from a small-sized venture and develop it to resell to global companies.

Yuhan is an open innovation veteran. In 2015, it signed a deal with Billerica, Massachusetts-based Genosco to acquire technology for Lazertinib, a treatment candidate for non-small cell lung cancer. Yuhan developed the drug and sold the technology to Janssen Biotech in 2018.

Yuhan invested 10 billion won in Aprilbio in March, becoming the second largest shareholder of the Chuncheon, Gangwon-based bio venture that owns technology for an innovative antibody.

“Many domestic bio companies have been developing new drugs, such as anticancer drugs, treatments for metabolic diseases, nervous system disorders and infectious diseases,” said Won Hee-mok, Chairman of the Korea Pharmaceutical and Bio-Pharma Manufactures Association. “Particularly, the number of drug candidates that have been undergoing Phase 3 clinical trials, the last round before commercialization that cost lots of money and time, is up 274 percent this year compared to 2018.”