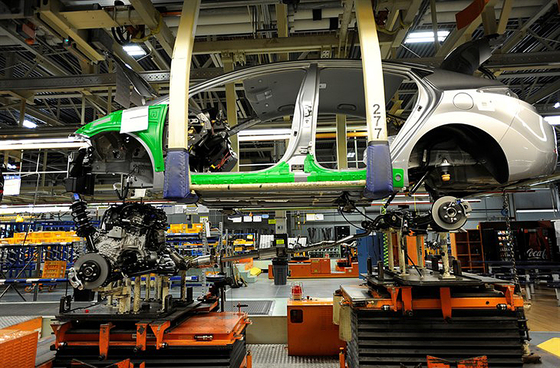 
Car makers are having a hard time maintaining inventory due to the global chip shortage, and the struggle to keep cars in stock is likely to continue.

According to a SK Securities report released Sept. 23 based on research from MarkLines, Hyundai Motors in August had 47,000 cars in its inventory in the United States. That’s a 13 percent on month drop from the stock of 54,000 cars in July.

The inventory is expected to last the company 19 days, which is less than one-third of a healthy inventory. Companies should have enough cars on hand for 60 to 90 days.

Kia had 58,000 cars in its inventory in the United States, which is expected to last the company 27 days.

Kwon added that stock of the Kia Forte K3 and the K5 dropped from July, whereas those of SUVs such as the Telluride and Sportage rose slightly.

There were 1.06 million cars in stock in the United States in July, down 59 percent on year. The figure is down 5.36 percent on month.

Japanese car inventories are especially low. Subaru had seven days of inventory, and Mazda Motor had 13 days. Toyota had 18 days of supply and Nissan 19 days.

General Motors has 22 days of inventory and Ford 41 days.

“Automakers were profitable in the first half of the year due to selling their inventory, but the situation is different now,” said analyst Kwon. “Now there aren’t sufficient quantities in stock to be sold, and when and to how much extent production will resume will be the key to determine future performance.”

Shortage of cars in stock is also a problem locally. People have to wait some six months to receive their cars when purchasing models such as Hyundai Motor’s Tuscan and Santa Fe and Kia’s Sorento and Sportage.

“It was expected that the chip shortage will be somewhat solved in the third quarter, but the current situation means that supply wasn’t sufficient,” said HI Investment & Securities analyst Ko Tae-bong. “It’s important to decide how to allocate the chips, and it’s expected that most of the chips will be supplied to the more profitable local market.”

Ko added that it will be a supplier’s market for the time being.

Ford Europe chairman Gunnar Herrmann told CNBC at the IAA Mobility 2021 motor show in early September that “the chip shortage could continue through to 2024” and “it’s difficult to pinpoint exactly when it will end.”