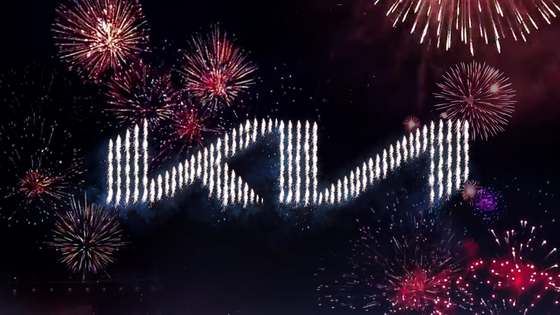 Kia celebrates its new company name with a drone show during the ″Logo Unveiling Event.″ Kia changed its name from Kia Motors to Kia. [KIA]

Korean companies are giving themselves English-language names as they go global.

This involves more than just a change of branding, trademarks and doing-business-as names. The companies are formally registering themselves using the new monikers, updating records at the courts and tax office to reflect their new identities.

While the names are still formally registered with the Korean authorities in hangul, they are phonetic representations of foreign words.

The changing of names is primarily to emphasize new missions and goals, especially in line with the rising trend in environmental, social and governance (ESG) management.

“Hanwha Impact will lead a sustainable future for the nation and humanity through our transition into an eco-friendly energy and carbon-neutral company, breaking conventional frames and investing in future technologies,” Kim Hee-cheul, CEO of Hanwha Impact said in a statement after changing the company’s name.

SK geo centric explained that it is seeking a break with the image that construction companies destroy the earth and wants to start to carry out projects that “are centered around the earth and the environment, hence the name geo centric.” Kia’s new shortened name means it will “go beyond the manufacturing of cars and expand into new businesses that offer innovative mobility experiences.” 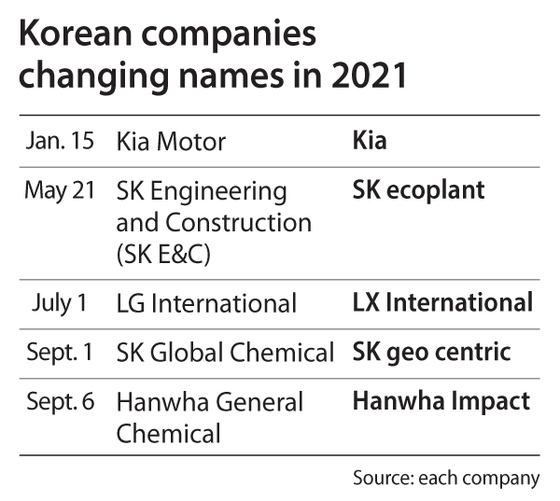 “The reason we use ‘international’ instead of ‘sangsa’ is because we want to go beyond our conventional trading limits and compete in the global market,” an executive from LX International said.

New advertising companies are often brought in because new names mean coming up with whole new ideas for a brand. TBWA took part in the naming of SK ecoplant and HS Ad took the helm in the rebranding of LX International.

“It costs billions of won to change names of a company,” said an insider of one of Korea’s top five conglomerates.

The whole process can take time. It took Hanwha Impact six months to discuss the matter with employees, establish the company’s new vision and strategy, come up with the name and finally file the change, according to the company.

Despite the money and time needed for the makeover, however, not everyone is on board with the change.

“I get that it’s a name that follows the trend, but honestly, it’s hard to understand,” said an insider from a company whose company name recently changed. “It’s difficult to explain what we do because the meaning isn’t clear.”

Changing names could end up eroding trust with customers if the company fails to change in the way promised.

“With the ESG management being emphasized and millennials rising as the main consumer demographic, it’s becoming easier for companies to rebrand themselves,” said Suh Yong-gu, a professor at the school of business of Sookmyung Women's University. “If they change their names and just stay the same, then it’s nothing but greenwashing.”

“World-renowned companies seek to make changes, but they don’t change their names easily,” said Lee Eun-hee, a professor at the department of consumer science at Inha University. “Companies have to take into account that changing the names of companies could lead to decreased level of trust from their customers, even if it’s to stay in line with the environmental trend of the fourth industrial revolution."

Korean companies at risk of delisting as conditions worsen