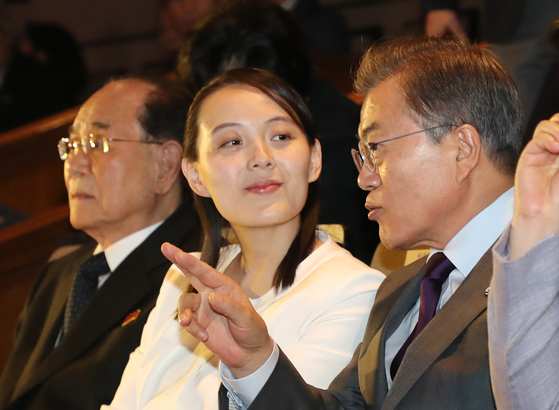 Kim Yo-jong chats with President Moon Jae-in during a visit to Seoul in February 2018. [YONHAP]


Kim Yo-jong, sister of North Korean leader Kim Jong-un, said Saturday that Pyongyang will take steps to improve relations with Seoul – including another summit between the two countries' leaders – if South Korea abandons what she characterized as "hostility" and "double standards."

Kim's comments, which were released late Saturday, followed a similar statement made public on Friday in which she said Pyongyang would be willing to resume talks with Seoul provided certain terms were met, and that a formal end to the Korean War – suggested by President Moon Jae-in in a speech at the United Nations General Assembly last week – was an "admirable idea."

While Kim said that there was no need for the two Koreas to waste time "picking disputes and standing off with each other" when they could be mending ties, she warned that the South should "make the correct choice" in inter-Korean affairs and "consider every word it says carefully."

In her Saturday statement, Kim took particular issue with the South's use of the word "provocation" to describe weapons tests by the North, calling such a characterization a "reckless assessment" that "incites inter-Korean conflict."

Analysts sais Pyongyang is attempting to leverage President Moon Jae-in's pursuit of inter-Korean engagement to pressure Seoul to get the Biden administration to ease crippling sanctions, suspend joint U.S.-South Korean military exercises, or allow it to keep its existing arsenal of nuclear weapons and missiles.

Professor Park Won-gon, who specializes in North Korean studies at Ewha Womans University, called the latest statement by Kim an attempt by the North to maintain the upper hand in any future negotiations by maintaining ambiguity in its stance vis-à-vis the South.

"In her statement, Kim does not specify if the 'hostile policy' that Pyongyang takes issue with is that of Seoul or Washington," Park said. "She also calls her opinion a personal one, suggesting it has not been adopted as official policy and giving her leeway to change based on the South's response."

Kim also pointed out the North's wide-reaching objections to U.S. and South Korean policy towards North Korea leave it much negotiating space when it comes to negotiating a thaw in tensions.

"At the 8th plenary session of the North's ruling Workers' Party, North Korea described a broad array of objections to current South Korean and U.S. policy, including not only joint allied exercises and new weapons being introduced by the South, but also sanctions, human rights, and the stationing of U.S. forces on the Korean Peninsula," Park remarked.

Park said that Kim's statement is an attempt to criticize the South's development of new weapons while maintaining the need for its own weapons development program.

"Kim warned the South not to try and upset the balance of power on the Korean Peninsula. However, in its recent official statements, the North criticizes the South and the United States for developing and deploying new weapons, while describing its own weapons as necessary for its own self-defense."

In her latest statement, Kim, who heads the Publicity and Information Department of the Workers' Party of Korea and is often charged with issuing comments directed at the South, urged Seoul to abandon its "unfair double-dealing standards, hostile policies (toward North Korea), various prejudices and hostile comments destroying trust," if it wants the North to respond to its calls to improve ties.

Kim hinted that the North could possibly accept the South's calls for a formal declaration ending the Korean War, restore an inter-Korean liaison office the North destroyed last year, and discuss another summit if the Koreas are able to build mutual trust.

The Korean War, which began in June 1950, concluded in July 1953 with only an armistice – and no peace treaty – leaving the two Koreas technically at war to this day.

Kim's statements came in response to Moon's speech at the United Nations General Assembly last week, where he called for a declaration between the leaders of the Koreas, the United States and China to formally end the war.

While Kim and the North's Vice Foreign Minister Ri Thae-song rebuffed Moon's proposal with two separate statements on Friday, Kim hinted at the possibility of reconciliation, saying the North was willing to hold "constructive talks" if the South stopped angering it.