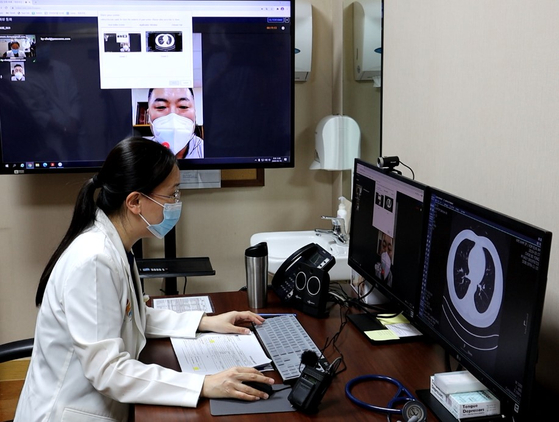 Kim A-reum, the director of the International Healthcare Center at Inha University Hospital, meets with a patient. [INHA UNIVERSITY HOSPITAL]


Inha University Hospital has launched a telemedicine treatment service for foreigners living in Korea during the Covid-19 pandemic.

Acknowledging the mounting demand for telehealth among foreign nationals residing in Korea who could be left out of the ongoing social services in the country, Inha University Hospital launched a virtual healthcare service for foreign residents on Sept. 3.

“We totally understand that finding a doctor who can communicate in English, as well as traveling to visit a hospital, is not easy for foreign nationals in Korea — not to mention that people avoid crowded places like hospitals due to Covid-19 these days,” said Kim A-reum, the director of the International Healthcare Center at Inha University Hospital.

The non-face-to-face treatment service provides a real-time virtual consultation with a doctor via a mobile phone or computer, saving the trouble of going to a hospital for in-person treatment.

The Ministry of Health and Welfare has temporarily permitted non-face-to-face treatment since February last year under the revised Infectious Disease Control and Prevention Act.

This was not only to protect patients and medical personnel from possible exposure to Covid-19, but also to strengthen the sustainability of the Korean medical system in the time of crisis. About 2 million Korean nationals have so far benefited from telemedicine services, mostly via mobile phones.

Inha University Hospital began providing online medical consultations and advisory services to Korean expatriates in August 2020, the first of its kind through a regulatory sandbox, and later in February for Koreans in the country under special conditions. The service was initially provided mostly over the phone, but Inha expanded to video calls when it officially launched this year.

With the service recently expanded to foreign residents in Korea, a number of foreign patients have already received prescriptions and treatment — including a patient who couldn’t see her family doctor in her home country for a chronic disease and a patient who suffered from a severe allergic reaction during her quarantine period, the hospital said.

Any foreign national in Korea wishing to receive telemedicine services can make a reservation by calling the International Healthcare Center hotline (032-890-2080/2090 for English, 032-890-3200/2095 for Russian and 032-890-2092 for Chinese) or writing to the email address inhamedicalcenter@gmail.com.

After making an inquiry, the hospital will check personal information, schedule an appointment and later send a Zoom link.

“We do our very best to listen to any voice from anyone all over the world who needs medical services regardless of nationality or residence,” Dr. Kim Young-mo, the president of Inha University Hospital, said. “We hope to serve the purpose of helping people in need during this time of uncertainty.”