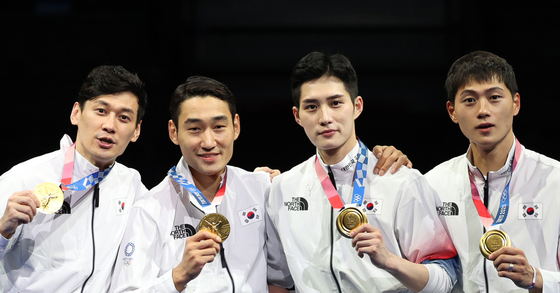 The Korean men’s sabre team hold their gold medals on July 28 at the Makuhari Messe Hall in Chiba, Japan. With the gold, Korea successfully defended the men’s team sabre title it has held since the London 2012 Olympics. [YONHAP]


After returning from the 2020 Tokyo Olympics in style, men's sabre team gold medalists Kim Jung-hwan and Oh Sang-uk are still at the top of their game.

The team gold medal followed Kim Jung-hwan’s individual bronze medal after beating Sandro Bazadze of Georgia for what was Korea’s second medal in Tokyo. But for world No. 1 Oh, for whom the Tokyo Games marked his first time on the big stage, the Georgian was the reason he dropped out of the individual quarterfinals. 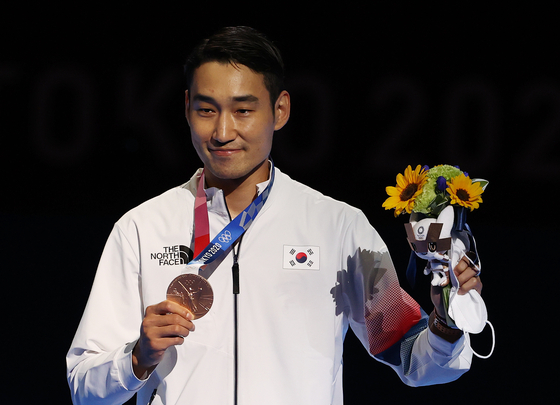 
But not long after making their victorious return to Korea, the fencers were back on the piste at Hongcheon Stadium in Hongcheon, Gangwon, where the first national team qualification match took place from Aug. 17 to 21. Kim Jung-hwan took first place, Oh took second and Gu took third. Kim Jun-ho took fifth place.

A month later in the second national team qualification match that took place from Sept. 11 to 15 at Yanggu Stadium in Yanggu, Gangwon, the results were not that different. Oh took first place, Kim Jung-hwan took second and Gu and Kim Jun-ho tied for third, proving once again why they were the ones that represented Korea at the Games.

Kim Jung-hwan and Oh, the oldest and youngest members of the team, sat down with the JoongAng Ilbo to speak about their experience at the Games, their fencing careers and what teamwork means to them. The following are edited excerpts.


Q) What did you think of each other when you first met?

Kim: When Oh was in his last year of high school, people were already talking about him. He was only 19-years-old when he beat veterans like Won woo-young or Oh Eun-seok. When I first faced him, I won with a comfortable margin and thought that he isn’t as spectacular as he is known to be.

But then when Oh came to the national team, we became roommates and once I really got to know the guy, I couldn't help but notice how passionate he was about fencing. He watches fencing videos whenever he has a chance. I caught him watching my videos often too.

Oh: At first glance, he looked a bit cold because he doesn’t talk much when he is focused.

Kim: Younger players usually have a hard time figuring me out but then Oh became my roommate. I liked that he asked many questions. I thought that he could really build on my advice. So I spoon-fed him the quintessence of my experience and know-how. I wanted to let him in on all the best answers that I had found in fencing and in life.

Oh: That’s why I always said I want to be more like Kim.

Kim: At first, he improved rather slowly but at one point, his potential sort of exploded. That made me proud, but sometimes I also wish that I was a bit younger like him. 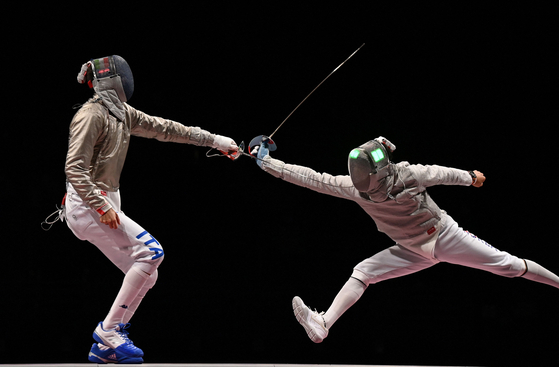 
It seems like Kim had a lot of influence on your style of play?

Oh: In 2016, we were in Senegal for an international tournament and the team lost because of me. At that time, I wasn’t so good at quickly going after the opponent once their attack was over. I remember that there were other athletes all around when Kim told me to repeat the same motion a hundred times right then and there. But he wasn’t mad, he knew that I needed that kind of motivation.

Kim: I remember, I said ‘Come down here now,’ while he was on the piste.

Oh: I don’t think the other athletes would have even noticed but at the time, I felt a bit embarrassed to practice in front of everyone else. But that was what helped me figure that motion out, and in the end I felt that I really knew how.

Kim: And that is what put Oh up at world No. 1. It’s the same for me, my worst skill in the past is now my most powerful weapon.

As athletes, if we avoid the weak points in our play, we fall behind. We need to just keep trying to break through, that is the only way to make a weakness a strength. That’s why I made Oh practice on the spot at the time. Now, he’s even better at it than me. 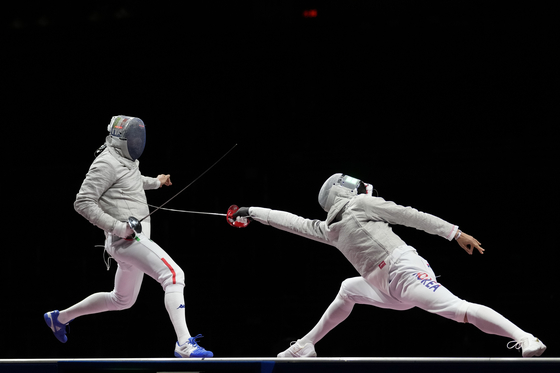 Kim: I told our team members that we need to keep moving forward, that we need to get good results. I said that we should round off our Tokyo Olympics success by playing well in the domestic tournaments. That’s what we did and we plan to carry this success into international tournaments too.

Kim: I’ve been through three Olympics now and I don’t think people have been ever been more interested in fencing than now. I just hope that it’s not a temporary thing, but that the interest continues and people find themselves cheering on for fencers.

Oh: After the Tokyo Olympics ended, we got on the plane with the rugby team. When we landed, we were showered with interviews, camera flashes and congratulations. But the rugby team had to wait inside because of us then after 10 minutes, they took two pictures and went home. It didn’t feel right. They may well have put in even more sweat and toil than us.

Though I am grateful that more people are interested in what we do, I wish that other sports could share some of that attention as well.

Kim: I agree. Fencing wasn’t that different from rugby in the past. The more we encourage the less popular sports, the faster they will be able to grow.