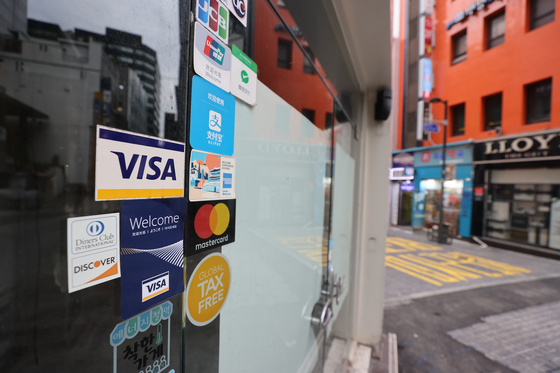 Credit card logo on a store that has been closed in Myeong-dong, Seoul on Monday. The government said a cash-back program whose goal is to help small stores that have been affected by the social distancing regulation will start Oct. 1. [YONHAP]

The government’s cash-back program to encourage spending on credit and debit cards will start Oct. 1

According to the Finance Ministry Monday, card users will get 10 percent back on any amount spent over 103 percent of their average spending in the second quarter of this year.

The program applies to spending in October and November and is open to anyone that applies regardless of their incomes, including foreigners.

For example, if a person averaged monthly spending of 1 million won on a credit or debit card between April and June, and spends 1.53 million won on the same card in October, that person will get a cash-back refund of 10 percent on 500,000 won, or 50,000 won.

The cash-back refund will be credited to the credit or debit card and must be used by the end of June 2022, which it expires.


Individuals can apply for a single credit or debit card.

In anticipation of many applications, credit card companies are accepting application according to the last number of the year of a person's birth.

But not all credit or debit card spending will be accepted.

Spending at retailers owned by large companies such as Emart, Homeplus, Lotte Mart and Costco will be excluded. The same is true for spending at department stores, duty free stores and luxury brand stores.

Purchases made on major online malls such as Coupang, Gmarket, SK’s 11st and Shinsegae’s SSG will not be accepted, along with spending in hostess bars and at golf courses.

Spending on Market Kurly, which is considered a small or medium-sized enterprise, will be allowed.

However, spending on food delivery service Coupang Eats will be accepted as well as other food delivery apps such as Baedal Minjok and Yogiyo. Spending on hotel apps including Yanolja also counts.

Spending at such franchises as Starbucks will also count.

The cash-back program is meant to encourage spending, especially at small shops that are struggling under social distancing restrictions.

The government allocated 700 billion won for the cash-back program, which is funded through a supplementary budget.

“With the fourth wave lasting the longest since Covid-19 started [in 2020], small shopowners and the self-employed are now reaching their limits,” said Finance Minister Hong Nam-ki. “We have decided to execute [the cash-back program] with the close cooperation of quarantine authorities as reinvigorating the local economy is an important policy goal.”